The Fraternity of the Soul Eater by Scott A. Lerner

Posted first to Blog Critics as Book Review: 'The Fraternity of the Soul Eater', A Samuel Roberts Thriller by Scott A Lerner. 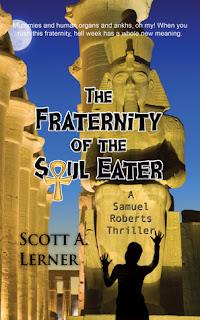 In The Fraternity of the Soul Eater, Scott A. Lerner takes us on a journey into the darkness that dwells in the mind of those most enchanted with darkness. Samuel Roberts an attorney by day has found himself in situations that cannot be explained. He feels as though there is danger that others do not believe, nor have they ever seen. His law duties seem quite tame by contrast and he finds himself wishing for more. His girlfriend thinks he is a junkie for danger and he is not sure he doesn’t agree.

He knows that something is stirring in the darkness through for he is having dreams he cannot decipher. Egypt often is the base of his worries, so when finds himself in an Egyptian museum he is both worried and excited.

The sudden danger though is quick and unexpected. He needs the help of his friend Bob, for things have begun to creep even him out. Even with warnings from his girlfriend to desist his quest he is unable to let go. Yet when she disappears he finds himself in deeper than expected. Suddenly his own life is on the line, and he is captured for an extremely unlikely DNA experiment.

Can Sam save both his girlfriend and himself from a crazy mad man who believes he can brings back the old Gods of Egypt through experimentation? Will this danger finally be the end of his relationship? With Bob as his only hope he escapes though brutality, something he has always avoided in the past. Will this be the final means that will allow darkness to enter his own soul?

Lerner gives us characters that are full of fun, bluster and charm, yet have that energy that you feel is trustworthy. His dynamics between his characters and protagonists are both strange and unlikely, but at the same time intriguing and interesting. You find yourself immersed in a story that takes you to the edge of darkness, twisting and realigning your own take on life.

The edge of darkness seems real and at any time you could find yourself immersed through the work of those who believe, for they are quite fanatical.

If you enjoy mystery, danger and the macabre, riddled with humor and friendship you will find this a must have for your library. You can read it time and again and still find passages you may have missed which make this a fun and unique find.

The Fraternity of the Soul Eater blog tour site:
http://thefraternityofthesouleater.blogspot.com

Author and attorney Scott A. Lerner resides in Champaign, Illinois. He obtained his undergraduate degree in psychology from the University of Wisconsin in Madison and went on to obtain his Juris Doctor degree from the University of Illinois in Urbana Champaign. He is currently a sole practitioner in Champaign, Illinois. The majority of his law practice focuses on the fields of criminal law and family law. Lerner’s first novel and the first Samuel Roberts Thriller, Cocaine Zombies, won a bronze medal in the mystery/cozy/noir category of the 2013 Independent Publisher (IPPY) Awards. The second book in the series is Ruler of Demons. The Fraternity of the Soul Eater is book 3. Book 4, The Wiccan Witch of the Midwest, will be released on Halloween, 2015.

The Fraternity of the Soul Eater Book Summary:

It’s been a while since Samuel Roberts was called upon to save mankind, and he’s getting restless. His girlfriend Susan thinks he’s a danger junkie, and he’s worried he has a hero complex. He’s back to his usual small-town lawyerly duties in Champaign-Urbana, handling divorces and helping people beat DUI raps. But then a young fraternity pledge calls. During an initiation ceremony he witnessed the live sacrifice of a young woman, but he had so much alcohol in his system that no one believes him. Except Sam. Lately Egyptian lore has been creeping into his life, his dreams, and his movie preferences, and he’s pretty sure he knows why. Evil is knocking on his door again.

Is the call welcome? Why can’t Sam be satisfied with his comfortable legal practice and gorgeous redheaded girlfriend? Maybe it’s because he knows that, as inadequate as he may feel to the task, he and his friend Bob may be humanity’s only hope against ancient supernatural forces combined with modern genetic engineering. Come hell or high water. Or in this case, the underworld or subterranean pyramids.

The Fraternity of the Soul Eater is the third book in the Samuel Roberts Thriller series, which began with Cocaine Zombies and continued with Ruler of Demons.

Leslie, thanks for the review! :)