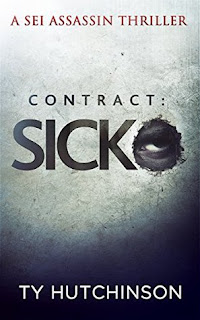 In Contract: Sicko by Ty Hutchinson, we catch up to Sei, a hired assassin, as she continues her hunt for her daughter. Her search has resulted in mostly dead ends, as the elusive Black Wolf has eliminated any witnesses. She doesn’t understand why he went to such lengths to kidnap her daughter, nor why he’s killing those who would be of help finding her. Sei is persistent and will do what it takes to locate her daughter, even cozying up to the enemy in order to get close. But make no mistake, once she gets what she is after, she also has her own form of elimination.

As she moves from lead to lead, she continually finds herself in danger, but she has no fear, her daughter is all that matters. Using her enemies to get just a bit closer, the collateral damage is almost her undoing. Those who have helped her in ways that create a bond, those who only peripherally understand what is happening, become targets as Sei persists in her quest to find what was taken from her. Will this be her final search, she has found another witness? Can she get to him before he too is taken out of the equation?

Hutchinson brings us a stronger and more visceral Sei. At her wits end, beyond any thought of redemption, she moves closer to finding her daughter that was kidnapped at birth. Having been told the child was dead, the information slowing leaking in from those who were there, may provide her with answers. She will not rest without finding more.

Each she finds is either already on the run or hiding out from both her and the elusive Black Wolf. And the field is dwindling, soon there will be no one to ask as the pool of those present at the kidnapping is quickly being eliminated. Each character has both repulsive as well as redeeming qualities, but they are all unsavory. Sei has no qualms of using them until they are no longer of use and then leaving them as she has all the others, either dead by her own hand or that of the Black Wolf.

If you like fast paced action with tense situations and strong female leads you will find this and the rest of the series fascinating. Full of mystery, suspense and even some gratuitous killings, you find the story interesting and the curiosity of how it will turn out keeps you enthralled. Hutchinson brings in another home run as Sei continues her search.


This would be a great fit for your library if you enjoy action packed, high energy novels with dangerous but strong heroes