The Outliers by Kimberly McCreight

Posted first to Blog Critics as Book Review: 'The Outliers,' A Novel of Suspense by Kimberly McCreight. 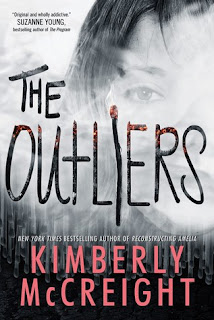 Every individual has differences, whether it is inherent in birth, learning though life or even just different thought processes, it is ultimately those differences that make us human.

In The Outliers by Kimberly McCreight We meet friends Wylie and Cassie. Close since childhood they communicate frequently and are always there for each other.  Wylie has not heard from Cassie since their last fight, and in true Wylie fashion she decides it is up to her to save Cassie from herself.

Cassie is missing and texts some very confusing messages to Wylie. Instead of letting her know where she is, Cassie sends clues. Confused and worried Wylie is further thrown off kilter by the presence of Jasper, an on again, off again friend of Cassie's.  Jasper says that Cassie wants him to take her to rescue her, and with all the evidence of Cassie's texts, Wylie has to turn off her gut instinct to help find Cassie and save her from whatever danger she has gotten herself into.

Yet as Wylie and Jasper are led farther into the wood of Maine, Wylie senses that something is really wrong. What is going on with Cassie, and what is she not telling them. The danger and secrecy seem palpable, and Wylie begins to fear for Cassie's life. Why is Cassie being held, and can they get to her in time to save her?

Wylie soon understands that finding Cassie isn't the real story, and that she must look into her own past to find the truths of the danger they now find themselves in. Can she trust the knowledge of what she is hearing, and can they find a way to escape with their lives. There is something about her and Cassie that make them a danger to others, and they must escape before their life is forfeit.

McCreight takes us into a strange and fascinating adventure where the differences of a certain percent of the population makes them dangerous and a threat to the others plans and ideas. She brings us characters with both flaw and strengths creating those you come to care about. The mystery involved and the danger shadowing the chase is palpable, and heady. The lack of knowledge of the true situation keeps you on the edge of your seat as the story plays out, keeping you guessing at each turn.

If you enjoy thrillers and suspense you will find this work to be one for your library. With just a touch of science, and a group of characters not afraid to deliver, you will find yourself guessing the real danger to the very end.