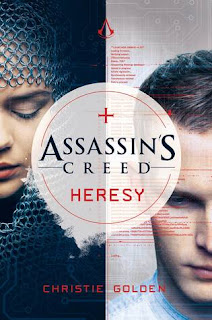 The history of Joan of Arc has been of interest to those who pursue knowledge in the order of Templar’s as well as the actuality of a woman noted by others to be chosen as God’s warrior. In Assassin’s Creed: Heresy by Christie Golden we are taken into the past in the most interesting of ways. A machine known as the Animus has been developed and tested to help pursue historical facts. Somewhat in the technology of virtual reality, the Animus is able to simulate the past and involve its user as one of the past figures of that history as it unrolls.

Members of the Templars, as well as the Assassins, are both interested in the outcome, but Simon Hathaway, being a member of the Templar Inner Sanctum, he is also the new Head of The Historical Research Division. He is ready to use the Animus and enter the body of his own relative, Gabriel Laxart, who fought with Joan of Arc.

Little does he know just how twisted and deep the intents and interests of both the Templars and the Assassins are in the life and death of this strange and dutiful woman. He finds himself just as fascinated with Joan the woman as he is Joan the warrior as he takes on the persona of Gabriel.

What Simon does not realize is just how deep the feelings go, and how strongly he finds himself looking at the truth. There is such a small space between truth and lies, can he reconcile his own beliefs about the who is really the heretic and who is truly the believer? And can he maintain his life as part of the inner sanctum when others may not want the truth to come out? Has his research put his own life in danger as well as that of the young woman helping him in his search for truth?


Golden gives us characters from history, and she uses both fact and fiction to bring us an in-depth and dangerous look into a world that shapes consequences in the future for those whose lineage is just is mired in heresy and truth as those from the past. In a form of history repeating itself, she adds just a touch of both glory and hatred, that makes its way though in a way that connects you, holding you spellbound.


If you enjoy mystery, historical facts and figures, technology, romance, and danger, you will find this work has it all. Mesmerizing and bold, Christie Golden leaves her mark in a twisted and dark tale of courage and truth.