Zan Gah and The Beautiful Country by Allan Richard Shickman

Article first published as Book Review:Zan-Gah and the Beautiful Country by Allan Richard Shickman on Blogcritics. 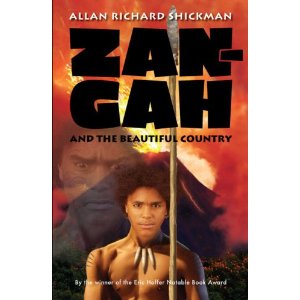 After rescuing his brother Dael, from the fierce Noi tribe that had captured and tortured him for two years, Zan Gah feels like he may finally be at peace with his life. He falls in love with the beautiful Lissa Na, a young Noi woman who helped in the rescue. But Dael is not the young carefree boy from their youth. He had changed, the torture had made him into a different man then he had been. There was anger and distrust, which haunted his very soul. Lissa Na continued to love him and was the only one that could soothe his soul. They married and when she died during childbirth, it brought out another side of Dael that was vindictive and spiteful. He hurt people and he hated his twin brother Zan Gah with a vengeance. He developed a group of followers who found his intensity and propensity interesting and exciting. He no long wanted to be a twin, so he shaved his head and tattooed his face to make himself different. His followers were right behind him, finding everything his did fascinating. This is a story of a damaged young man, his life and times, as well as his interactions with those who loved him.

In Zan Gah,and the beautiful country, Allan Richard Shickman has brought you a story of change and upheaval. What happens when an entire culture moves their clan and families? How do the changes manifest in the people of the time. For some the change is not so hard but for many the differences are brutal. He also takes you further into the lives of Zan Gah as well as his twin brother Dael.

Zan Gah had grown during his search for his brother. He was thrilled to have him back in his life, but it did not take him long to realize that Dael was not the brother he remembered. Zan Gah, is a cautious but enlightened man, he marries a young woman that many in his tribe would not consider. She is a hunter which is not acceptable in his clan and yet he admires her for her prowess. He continues to love his brother and try to help him to overcome his anger and rages, even though at times Dael is quite cruel. Zan never gives up on him, always remembering his brother when they were young; Dael was the funny one, the dreamer. He was well loved by all. Zan could not and would not give up on his ideal of who his brother was. When they find during a scouting, that the dreaded wasp hunters are gone, they group together to move their clan to the beautiful country. This is one of the few times that they will ever agree on anything.

Dael is a young man, embittered by the time and treatment that he received by the Noi tribe. They were cruel, subjecting him to all forms of punishment and torture, feeding him food not fit for animals. That he actually lived through this time for two years is a testament to his strength. His only relief during this time was when the young Lissa Na would stop by and speak with him. She found him fascinating, and grew to love him during this time. He relied on her soothing voice and her caring ways to help him make it though the worst of his torture. They were married once he was rescued and it appears that although he would occasionally have a flair up, life was good. When she died unexpectedly during child birth Dael became unhinged. He was everything and more of the very devil that the Noi had thought him when he was their slave.

This is a story of pain as well as hope. Understanding how Dael has come to be who he is does not make it any more palatable. He is an unpleasant young man and very easy to dislike. And yet there must be more to who he is as he has his own group of followers, willing to lay down their lives for him. He had a beautiful woman who loved him and left her own family for him. The story is intriguing but brutal. As it continues to develop you can only wonder and worry as war arises with the Noi. How will they cope and will things ever be as they were?
This is the second book in this series written with an eye to change. It must have been a brutal time and place and Allan Richard Shickman has spared no feeling with his descriptions of both the beauties and the atrocities. This book of the series is far more brutal and descriptive of the tribes and their clan wars. It brings to life the haunted realities of what captivity can create. I would recommend this book as it brings to a close ,the story of Zan Gah and his tribe. It is a wonderful thought provoking read and would make a good discussion for a reading group or book club.

Rating 4/5
Zan-Gah: And the Beautiful country

This book was received as a free copy from the publisher. All opinions are my own based off my reading and understanding of the information.

Email ThisBlogThis!Share to TwitterShare to FacebookShare to Pinterest
Labels: YA Fiction

You've been awarded the Life is Good Award :)
http://boroughofbooks.blogspot.com/2010/11/life-is-good-award.html

Hi there! Just stopping by on the hop. Have a great weekend!

Just stopping by to say I like your blog!!