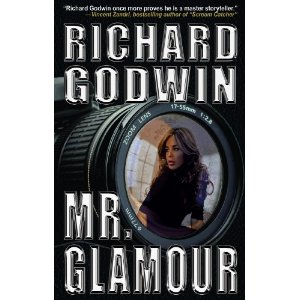 Madness and psychosis has many forms. Surfing the internet you often come across many strange and bizarre behaviors that are eerie and horrific, but we rarely have those occurrences happen to us or those we know.
In Mr. Glamour by Richard Godwin, he brings us face to face with many of our own fears and nightmares. When a wealthy group of friends seemed to be targeted for murder in the most macabre fashion what begins as a horrific murder mystery turns into a chilling and strange spiral into the innermost darkness of the mind of madness. The only things about the murders that connect them are the fact that the people know one another and are friends, and the fashion in which they are murdered and then posed in some strange fashion. These two things assure the police they have a serial killer, and yet there are enough differences that even that is suspect at times. Is there more than one killer?
DCI Jackson Flare and Inspector Mandy Steele are assigned to investigate the murders, and as the killer finds a way to invade their own thoughts they find themselves fighting the darkness within as they delve further into the dangerous mystery of a murderer who seems to have the entire team stumped. Can they find him before he kills again? Will the darkness they try to hide in their own lives come spilling out in the case, ruining them and their careers, like the secrets that are coming out with the murders?

Godwin has delivered with a horror filled story that keeps you guessing to the very end. His characters are well written, and while they often embody the things we dislike about those who believe money can buy it all, they also have characteristics that draw you to them as well. This makes the horror even more incredible because Godwin has a way of making you know the victim. There are numerous variables that keep you wondering where the killer is, but the red herrings create such a haze of smoke and mirrors that the perpetrator remains elusive until the very end.
The horror is the stuff of nightmares and Godwin’s detailed rendering of the murders are both creepy and impressive. The ideas and story are interesting and solid, built with an eye to credibility.
If you enjoy murder mysteries and even a bit of horror in your reading this is the work to find. Godwin’s depiction is well done and will keep you up with every light turned on well into the night.
Rating 4/5
This book was received free from the publisher. All opinions are my own based off my reading and understanding of the material.
Posted by Leslie at 6:17 PM