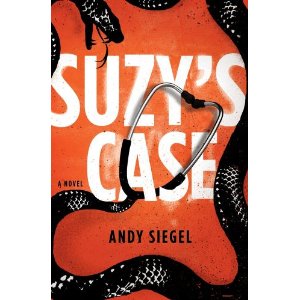 So many illnesses these days target the young. Many live a life that has no resemblance to that of most children, hospitals are their playgrounds and doctors and nurses their friends. But what happens when something goes wrong in these playgrounds, the results are generally more catastrophic.
In Suzy’s Case by Andy Siegel, you are taken into the life of a child that has suffered the worst and yet maintains a carefree and happy attitude. Suzy is an amazing and wondrous child, a joy to be around.
We follow Tug Wyler, a personal injury and malpractice attorney, as he finds himself in a case that is six years old, with an expert that is not convinced of any wrong doing. Thinking he will easily be able to be recused from this case, he does not factor in the resilience of a strong and protective mother. Where she believes, he can only follow. Soon he is caught up in a case that is way beyond his understanding, and as he moves forward his own life is in jeopardy.
On the surface, everything is what it appears to be, but a bubbling cauldron of trouble is heating up. What really happened in that hospital six years before?  Was Suzy really just another unfortunate statistic, or is it as her mom believes. There is certainly something foul that is beginning to surface, but can Tug grab and hold before it slips away?
Always a difficult feeling when dealing with children and stories that involve them to this extent, yet Siegel has handled it with great care and sensitivity. You grow to love Suzy in a way that is beyond the imagination. She becomes so real and a pulse that glows though the pages of the book. Her mother is a woman on a mission and will not allow even the smallest of stumbles. Sharp with a few unsavory connections, she is the catalyst that continues to guide the case forward. With so little proof of her claims, she nonetheless holds the cards to make this lawsuit break apart. Her love and fierceness remind you of that of a jungle cat, and she will not stop.
Tug is known for his ability to close cases, but he is also a maverick, often putting his own career in jeopardy to do the right thing. While his life often seems to spin out of control, he really has a handle on the true meaning of integrity. There is a veil of trust that circles him, and he does not always think before acting.
This is an unforgettable journey, a story of hope and horror. The characters are so real you come to believe in them. This is like reading the story behind the headlines, but with a personal stake in the outcome.
You are alternately charmed and horrified, but it is difficult to understand the truth. If you enjoy mystery and medical suspense, you will enjoy this work. Suzy’s Case would be a wonderful addition to your library. This would be a great book for a reading club creating dialogue and disbelief, a solid work worth mention. This has been one of my favorite books of the year.
Rating 5/5
This book was received free from the authors publicist. All opinions are my own based off my reading and understanding of the material.
Posted by Leslie at 8:29 PM