The 5 Moons of Tiiana by Paul T. Harry 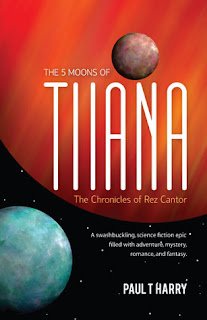 Escape from worry, work or just wanting an adventure are the things that make reading such a joy. To find a book that takes you in and makes you part of the fantasy is one of the wonders of what a good writer can do.  The adventures become more real and the life outside fades a bit to the surreal.
In the 5 Moons of Tiiana by Paul T Harry, you will find an adventure that takes you into the unknown.  While Harry lists Edgar Rice Burroughs as one of his inspirations I found the experience somewhere between 20 Thousand Leagues Under the Sea by Jules Verne and the Star Wars epic.
We begin with a world in turmoil and a Royal Family soon to be annihilated. The work revolves around Rez Cantor, a captain in the Corin military who is slated to save the princess.  With the Relcor invading their homes and destroying their peoples and way of life, Rez is chosen to save the princess because she knows him well and trusts him. He is a part of her royal guard.


Planning and preparing a rescue and escape is only part of the battle. Once the plan is put into place and escape is eminent, an explosion leaves Rez in a strange new world, one full of a hostile land itself, but the people are dangerous and untrusting as well. He finds himself captured and genetically altered in order to become a slave and work their underwater mines.  After years of abuse he escapes and is rescued by another group of people, and it is in their home he finds that the worlds are actually moons.
He is challenged as being the only one who can save this strange group of people and their homes before he can return to his own world. His destiny has moved him into a different part of the galaxy. As he moves to build an army he finds a few old friends who have also survived the explosion of their escape craft, and with the help of both his old and new friends he is on the precipice of discovery of what is expected of him.  Captured by the King of one of the important areas, Rez also finds his princess, his charge from his own home. How can he rescue her too as his fate is now linked to hers as well?
While I was confused a bit at the beginning, you find the story will fill in the pieces as you are moved through the chambers of this adventure filled mystery.  Full of science fiction and fantasy, and filled with romance and action, Harry sets the pace for a romp of towering proportions.  As you wonder the streets and waterways with Rez, you experience the beauty and danger, the strange and bizarre, and the emotions that emanate from the characters. The descriptions of the land and people take you there, and the experience is as I mentioned above, surreal and exciting, much like the first visions from the mind of Jules Verne.
The dangers take you in, and the people alternately charm you or horrify you, but either way you harbor feelings about them. If you enjoy a great science fiction and fantasy with just the right edge of vision, you will find this one of the books you need in your library. I enjoyed this work and if you are looking for an epic adventure, The 5 Moons of Tiiana will seize your imagination. Take a chance and experience the adventure.
Rating 4/5
This book was received free from the author. All opinions are my own based off my reading and understanding of the material.
Posted by Leslie at 5:58 PM