Daughter of Sand and Stone by Libbie Hawker

Posted first to Blog Critics as Book Review:'Daughter of Sand and Stone', A Historical Fiction by Libbie Hawker. 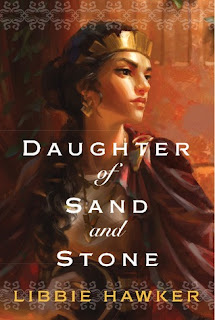 In Daughter of Sand and Stone by Libbie Hawker, we meet a young woman who is determined to find her own way. Zenobia is the daughter of a Syrian sheikh, and she has determined that she will not marry against her will, and she is also sure that she has a very powerful birthright. Convinced of her right to both decide and choose, she spurns love for power. When her father dies she makes a move on one of the most influential men in the city.

That he is already married makes no difference, she finds a way to beguile her way into his life, arranging her own marriage to him. Her goal is to become the Empress of the East which she believes is her birthright and while her marriage is not peaceful, as second wife she must learn how to get around her husband’s other wife. The birth of Zenobia’s son only makes her life more difficult but she finds herself assured of her own victory and continues to stake her claim as Empress.  As war breaks out can she find her claim or have the gods betrayed her in their wrath? She finds she must rely on the other wife, but has she gone too far?

Hawker does a great job of taking you back in time to a place of war and beauty. She sets the scene with the complications of young women of the time, and how marriage is more of barter then choice. Her development of Zenobia gives us a strong female lead and you are both encouraged at her beliefs and decisions but horrified at the direction she is willing to take to get what she wants.

After becoming what she believes is necessary to further her own agenda, war changes the tide and what she believed of as powerful is no longer enough to see her through to her claim as she sees it. She now must rely on others that have no reason to trust her. It seems that she has sealed her own fate, but will the gods relent one last time? Can the man she truly loves be the one who saves her, or has she set things in action that cannot be undone?

If you enjoy history and epic battles, as well as romance and power you will find this a great addition to your library. Hawker has a way with words that takes you into the past in living color. You will feel the heartbeat of both power and heartbreak.