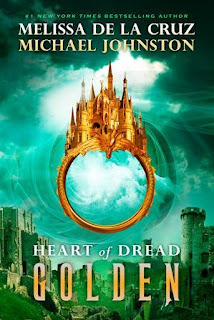 In Golden: Heart of Dread Book 3 by Melissa De La Cruz and Michael Johnston, we find ourselves back in the darkened world of Nat and Wes.  In the conclusion of the Heart of Dread trilogy, we find a bleakness that seems more insurmountable then all that has come before.


The bond Nat has with her dragon is draining daily, and the destruction of New Kandy leaves Wes close to death. In his attempt to find and save his sister from the cruelty he imagines her life, he actually sees just how strong her power of darkness has become and how it has molded her into a stranger, one who will use that power to destroy whoever gets in her way.


Seeking help from any direction, Wes accepts help from the mysterious voice calling out to him from the hidden Blue. Yet he and his crew find this help is not what they expected and that they are in a more perilous situation than they had been before.  Their only hope now lies in Nat, and her quest to find a new world to replace the broken one they are now living in.


Will Nat survive the loss of her connection to her beloved dragon and can the love she has for Wes hold her to the task of seeing their world reborn.


The conclusion to the Heart of Dread Series is as exciting as the previous works that have led to the making of this new world.  The danger and excitement, as well as the quest to find the answers keep you enthralled, helping to push the characters forward. Yet De La Cruz manages to twist red herrings into the work at various times to keep you from thinking that you know how it will all end.


While this book will stand on its own, it will only bring you a few questions that will make you wonder. If you want the full thrill and detail of this great work, you will want to start where it all began, the making of an epic battle of the ages, and the distinction of varying shades of right and wrong.


Frozen, and Stolen, Books 1 and 2 will bring you the story in its entirety and you will find the set would be a great fit your library.  This would be a great trilogy for your youngster, but make no mistake; it is also a powerful work for any fantasy fan.


Melissa De La Cruz and Michael Johnston continue to create the stories of courage and friendships, ones that both you and your young adults will enjoy.