Posted first to Blog Critics as Book Review: 'Return to the Isle of the Lost', A Descendants Novel by Melissa De La Cruz 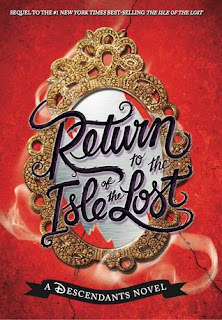 In Return to the Isle of the Lost
by Melissa De La Cruz, we once again return to Auradon, to find that Mal as well as her other friends have received messages telling them to return home. Life has been good and much of their own evil ways are behind them. Mal is the girlfriend of King Ben, and she often even treats those around her good.
She is surprised that someone has the gall to push her around. Yet it makes her curious, why must they all return home. What is happening in the Isle of the Lost. Her friend Evie looks into her Magic Mirror and is only further bewildered.

King Ben is on his own quest to find the reason behind the stories of a dragon on the loose, and Mal worries that it could have something to do with her mother. But even as she follows up by looking in to her fears, she finds that Maleficent is still just as she left her, just a small lizard laying in a cage.

Emboldened by the encouragement of her friends, they decide they must find out what is behind the summons. They have left both family and friends behind, and they need know if the rumors of a dragon have anything to do with Mal’s mom and the other parents from the Island.  They must sneak back in and see if the danger in Auradon is part of the evil lurking in their own home.

Can they find the plot, for they know there must be one, before it has a chance to destroy the peaceful Kingdom of Auradon, and thrust them back into the evil they left behind?

De La Cruz takes us back into the magical world of the Descendants, and gives us another adventure from the bold and brave children of the evil villains. She gives us a fun and dangerous quest to challenge our crew, and she keeps the adventure alive as they make their way one more time to the place they left behind. Can they steer clear of the danger that may be waiting for them?

This is a great follow up and tale of adventure to the Isle of the Lost. A great read for the young adult as well as those to remain young at heart. With the summer upon us this is a wonderful read for those lazy days as well as a great way to pass the time during travel or even lying on the beach. De La Cruz will keep you entertained.