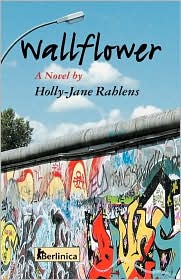 Serendipity is a wonderful word and an even more interesting meaning. Making desirable discoveries by accident, good fortune, or luck, coincide in with finding something unexpected. Any way you look at it, the word has wonderful connotations.

In Wallflower, a novel by Holly-Jane Rahlens, we follow the life of Molly Beth Lenzfeld as she makes a stab at living the life she thinks she is looking for. Spending time with her father in Berlin is not what she expected, and she is leaving to head back to New York where he will join her later. In eleventh grade, she is ready to be back in the states, her own form of comfort zone. Having come to Berlin to stay with her father while he spends a year working, she thought she would feel closer to her mother. She died of cancer when Molly was just eleven, and she still misses her terribly.

Having received her father’s permission, she will be staying with her older sister until he returns. She has decided to take one last trek while she is here; she wants to visit her mother’s home. Molly plans on taking a part of the wall her mother helped put together, back with her. This will be a challenge, she will have to use the Berlin transit system and pass over the Berlin Wall. Having missed the excitement of the wall coming down this will be her first visit.
On her way, she runs into a girl she knows named Carlotta Smith. Carlotta is everything that Molly is not. She is attractive, small and well built. She dresses outrageously and behaves that way as well. Molly is rather shy, and quite tall. The other thing she really dislikes about herself is her big feet. So when a young man boards the train, she looks quickly, noting he is very good looking and then looks away. Carlotta goes in for the kill, and instantly they are talking. When Carlotta gets off at her stop, the boy stays on, but he doesn’t talk or seem interested in conversation. Having to change from train to train to reach her destination, Molly is concerned she will get lost. When she runs into some drunks, she is afraid.

It is here where Michael Maier (Mick) steps in and rescues her. So begins an interesting and unique relationship, built in a matter of hours, moving throughout East and West Berlin through the transit system. Will they become friends or is there more in the camaraderie they have experienced. Has Serendipity come into play one more time?
Rahlens has given us an in depth look into Berlin, and the differences of the East and West. The fall of the Wall comes into play, and she also takes us to the inside, using the Berlin transit system as a way to get around. The scenery comes to life and she does such an excellent job with her descriptors it is easy to picture the city.

Her characters are fun and somewhat typical of children the world over at that same age. She does a wonderful job of bringing them together and finding the things that they both find of interest that seem to link them, which draws them closer. As they make their way through the city, and between the different factions of East and West, she sets a fun and unique tone that keeps the intrigue and interest at its height. In Carlotta, Rahlens creates a foil that could either push them apart or draw them together, depending on how they react to her presence.
This is a charming story of a young woman coming of age and finding herself. In a simple matter of hours, can one’s life really change?

I would recommend this for the YA reader; it is full of charm and history as well. Learning more about Berlin and the Wall is an added enticement, and quite interesting as well. With the background and history, this would also be a good book for a reading or book club. It is well written, excellently researched and fun.

This book was received free from the publisher. All opinions are my own based off my reading and understanding of the material.
Posted by Leslie at 7:17 AM