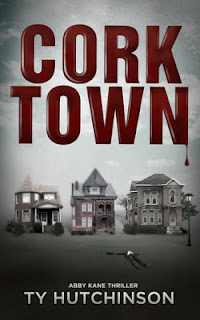 We often hear of cover-ups in crime and politics, but what happens when the two coincide. When innocent lives become the fallout of corruption, who really wins? Who is there to unveil the truth?
In Cork Town by Ty Hutchinson, we are introduced to the darkness and depravity of a cover-up that seems to be rooted in the past. When a serial killer begins copycat killings in Detroit, Agent Abby Kane is dispatched with her partner, from their home office in California. Known for her ability to find the truth, she is nevertheless confused. Everyone in the precinct seems to shy away from talking about the first crime spree, the one that is being copied. When trying to find answers, she runs up against a solid front of denial.  Finally allowed to visit with the original killer in prison, she only learns that he is guilty of murder and bank robbery, but even he insists that he didn’t do any cutting. Yet many of his victims were cut, including his girlfriend. Her visit only adds further questions, leading her back to some form of cover-up and a swift move to justice. But why?
When the original perpetrator is found dead in his cell, and executives of the auto industry begin turning up dead, she is at her wits end. Like being in a pinball machine, she hits bumpers in every direction she turns, spinning her off into other tangents. Trying to keep her home life separate, she finds herself trying to deal with both, but with little success.
Can she find the answer to the darkness that buries the truth before other lives are lost? Is the secret too entrenched to discover. As bodies continue to turn up, she races against the clock in an effort the stop the madness. Who can she trust when the house of cards begins to tumble and all avenues are a dead end?
Hutchinson has brought us another hero, a short of stature, but long of brass female agent. She is fun and feisty, fiery and bold, but also just beginning to realize what family means. Endangering herself is not just about her any more, but what it would mean to her children.  While a bit absurd, her continued texting in the middle of danger, is cute and just a little distracting. But she seemed unfazed and able to handle the small annoyances it brings.
When she realizes she has fallen for her partner, the story heats up a bit but disappointment and heartache are only a few pages away.
If you enjoy action, and a bit of savagery, you will enjoy Abby Kane, the agent in charge. Cork Town gives us background and a bit of history, along with a seriously disturbed killer. The red herrings are plenty, and the action is continual, keeping you deep in the pages.
This would be a great book for a book club. Abby Kane is a new hero to be watching for. I look forward to her further exploits.

This book was received free from the author. All opinions are my own based off my reading and understanding of the material.
Posted by Leslie at 9:12 PM