Love is Red by Sophie Jaff

Posted first to Blog Critics as Book Review: 'Love is Red', A Work of Fantasy and Horror by Sophie Jaff. 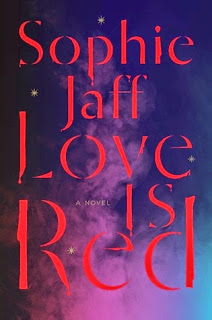 As times change and crimes evolve, the dating scene is just a bit more dangerous. Second guessing another person’s interest becomes a necessary ingredient to safety. Hooking up with strangers has a whole new threat, one that we read about the in the news more frequently than in the past.

In Love is Red  by Sophie Jaff, we follow the exploits of Katherine as she moves through the dating scene. Online dating is popular and when she meets David it seems they have much in common. Their bond begins to grow and she is surprised at the ease of their relationship. Feeling this must be love she is all in. There are a few oddities in their relationship but after her initial fear she has realized his sense of humor is somewhat strange.  They are actually very compatible with a great deal in common.

When she goes to a friend’s costume party she is sure she has blown it with David. As the party winds down she decides to try and meet him later. As she heads to the bedroom to change and is partly undressed while looking in the mirror she sees a man in the sitting on the chair right behind her. The atmosphere is tense and when he is unapologetic she does something she has never done before. She orders him to get up, and to disrobe. He seems furious, yet does as she asks, and as he completes she walks past him and leaves the room.

Feeling guilty she tries to put the episode behind her, yet she struggles with her shame. They come into contact again for it appears that this man, Sael is also a friend of David’s. Both keeping their prior meeting to themselves it is here that the problem begins. They begin to meet in secrecy, and she cannot stop, although she believes that her David is the one.

As all this is occurring in her life a brutal serial killer is walking the streets of New York killing young women. Because of the way they are sliced up he is called the ‘Sickle Man’. The killer narrates much of the story in this work and Katherine appears to be what drives him. His thoughts and actions are strange and mesmerizing, yet sadistic and brutal. Katherine has no idea that she is the target behind it all. Can she decipher what she is looking for and elude a killer that she does not realize is fixated on her?

Jaff builds a tale of fear and romance, with a strange twist of historical reference that seems to drive her killer. Her interplay between the protagonists keeps you guessing, and they are all just a bit off kilter. The narrative of the killer as he chooses his prey and continues until he releases them in death is both sick and dramatic.

The story within the story of the Maiden of Morwyn Castle is interesting although for me a bit distracting. It seems to have some bearing on the outcome and the background driving the killer, but I found it a bit distracting; interesting, but strange in the setting.  However it does not take away from the story and the connection is there.

If you enjoy horror and mystery as well as romance and love you will find this work a great addition to your library.

It would also be a great book for a reading club with a great deal of discussion about the dangers of dating strangers.