The Isle of the Lost by Melissa De La Cruz

Posted first to Blog Critics as Book Review: "The Isle of the Lost, A Descendants Novel by Melissa De La Cruz. 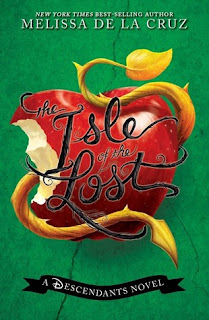 Fairy-tales are coined with a look at both good and evil. The characters and the enchantments as well as the personalities are the crux of how the story moves forward.

In The Isle of the Lost by Melissa De La Cruz she introduces us to the descendants of the fairy-tales of old. At some point all the evil characters were gathered up and put on an island locked down by magic. Here they continued their hijinks but only amongst themselves. The strongest became the most disliked and as time passed on, the children born of these villains are now just growing up.  While many of them have some of the same quality as their parents, there is a bit of a difference as well. Because of their interaction with other children they actually have a bit of hidden nice, and are in some cases very afraid of their own parents.

On A landfall not too far away all those of good are having their own problems. Magic has been outlawed, life is almost boring, and the fairest has way too much competition. The children here are also growing, wondering why magic is so wrong, and often privately discussing the rumors of an enchanted isle hidden in the world. Wanting to try out simple magic is against the law and a bit of rebellion–quite nice mind you– is underway.

What will happen if ‘forever after’ ends for the Isle of the Lost?

De La Cruz takes us on a fascinating journey into the lives and legends of the fairy-tales we remember. The offspring of the evil characters are a wonderful mix of ingenuous and bold, with slightly fearsome characteristics as they try to be more like their parents, yet find it uncomfortable as the more evil they act the less friends they have. Friends are important for children.  As they try to find a way into their parent’s graces, you will discover yourselves enamored of Mal, Evie, Jay and Carlos, the children of Maleficent, Evil Queen, Jafar, and Cruella De Vil. They will keep you captivated with their antics.

On the other side of the rift you will begin so see a shift in thinking as well, is it possible that there must be some evil in the world to balance out the boredom?

If you enjoy fairy-tales deconstructed and re-engineered you will find this a fun and frolicsome treat. A wonderful young adult novel it is still a treat for those who remember the stories and the young at heart.  Set as the beginning of a series, ‘The Isle of the Lost’ will take you back into memories of your own childhood. De La Cruz works her usual magic to help us see things that open other doors of other worlds.

Email ThisBlogThis!Share to TwitterShare to FacebookShare to Pinterest
Labels: action, Fantasy, fiction, secrets, YA, YA Fantasy, YA Fiction