The Wiccan Witch of the Midwest by Scott A. Lerner

Posted first to Blog Critics as Book review: 'The Wiccan Witch of the Midwest', a Samuel Roberts Thriller, by Scott A. Lerner. 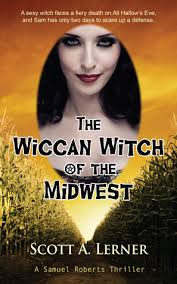 Samuel Roberts has moved and begun a new life as he tries desperately to get over a relationship with Susan.  Unable to keep her from the danger that seems to follow him, she has moved on, leaving him free to find love again.

In The Wiccan Witch of the Midwest by Scott A. Lerner, we catch up with Samuel as he begins putting his new life together. When his friend Bob introduces him to a new woman, he is strangely smitten. Bridget Gillis is beautiful and vivacious and also happens to be a fortune teller. Yet if that wasn’t enough to get his “spider senses” going, she also belongs to a coven of witches.  The village that contains the coven was founded by her great aunt, and Bridget could certainly be her twin if the paintings are even close to her aunt’s depiction.
The relationship becomes quickly complicated as just a few days before Halloween; Bridget is to be tried by their coven for practicing dark magic. The punishment is to be burned at the stake. With

Sam’s background in law, he is the perfect advocate for her dilemma.  His best friend, Bob, is suspicious of the quick relationship, but comes to help all the same. Can they help determine if she is the good witch or the bad witch before it is too late?

Lerner gives us another fun and dangerous romp with his returning character Samuel Roberts. As usual Sam is only trying to do the right thing, and this new romance seems so wonderful.  Caught up in the crazy circumstances that usually accompany his life, he finally seems to have found a new direction and woman. Can it all really be so simple?

Bridget is such a mix of characters, part minx, part seductress and part innocence. Yet there are secrets hidden beneath her beauty. Calculated and cold she is temptress and succubus all at the same time ensnaring Sam in her life. She is in need of rescuing, is Sam the man that can get her back on track?

If you enjoy mystery, humor, romance and danger you will find this perfect for your library. Paranormal and magic thread throughout the telling and you will fall in love with the characters one more time.

This would be a great book for the upcoming holidays. It is fun and enjoyable, one you will want to pass on to your friends.

The Wiccan Witch of the Midwest blog tour site:
http://thewiccanwitchofthemidwest.blogspot.com

Author and attorney Scott A. Lerner resides in Champaign, Illinois. He obtained his undergraduate degree in psychology from the University of Wisconsin in Madison and went on to obtain his Juris Doctor degree from the University of Illinois in Urbana Champaign. He is currently a sole practitioner in Champaign, Illinois. The majority of his law practice focuses on the fields of criminal law and family law. Lerner’s first novel and the first Samuel Roberts Thriller, Cocaine Zombies, won a bronze medal in the mystery/cozy/noir category of the 2013 Independent Publisher (IPPY) Awards. The second book in the series is Ruler of Demons. The Fraternity of the Soul Eater is book 3. Book 4, The Wiccan Witch of the Midwest, will be released on Halloween, 2015.

The Wiccan Witch of the Midwest Book Summary:

Samuel Roberts, a lawyer in Champaign, Illinois, has just moved to a new home to escape the memories of his old place—the stray body parts left by evil entities as well as traces of his relationship with Susan, who left him because he couldn’t stop risking both their lives trying to save the world. That leaves Sam free to fall in love again. Sam falls hard, suspiciously hard, for Bridget Gillis, a beautiful fortune teller who also happens to be a witch and a member of a coven. The village that encompasses the coven was founded by Bridget’s great-great aunt, also named Bridget and a dead ringer for her descendant. The new relationship quickly gets complicated. It is two days before Halloween, and Bridget is about to be tried by her fellow witches for the crime of practicing dark magic involving the blood of children. The punishment is to be burned at the stake. Bridget needs an advocate, and Sam is the perfect man for the job.

Sam brings in Bob, who is suspicious of his best buddy’s sudden passion. The two of them have until the Witching Hour on Halloween to clear Bridget’s name and find out who is killing the local children. As they comb the area for clues, quiz the locals, and take a crash course in witchcraft and Wiccan customs, Sam and Bob can’t shake the question: is Bridget a good witch or a bad witch?

The Wiccan Witch of the Midwest is the fourth book in the Samuel Roberts Thriller series, which began with Cocaine Zombies and continued with Ruler of Demons and The Fraternity of the Soul Eater.

Leslie, thanks so much for the review! :)