When The Devil's Idle by Leta Serafim


Posted first to Blog Critics as Book Review: 'When The Devil's Idle, a Greek Island Mystery,' by Leta Serafim. 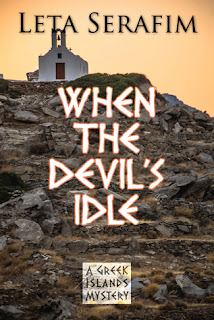 In When The Devil’s Idle by Leta Serafim, we follow the scene of a murder that is both troubling and odd. An elderly man is found on an isolated estate brutally murdered. The place this murder occurs is highly restricted to outsiders, and at the time of the murder the gate is bolted.

The family living there consists of a husband and wife and their two younger children. The murder victim is the grandfather of those children on the husband’s side. In residence at the time of his death the only other people there at the time are the gardener and the housekeeper.

Yiannis Patronas, of the Chios police, summons his top detective Giorgos Tembelos, to assist. In the Greek city of Patmos, when a German tourist is murdered it can only bring problems to the island. Giorgos brings his friend and amateur sleuth, a priest, Papa Michalis to help.

As they dig deep into the family history and the background of the victim, they find a past that is brutal. A Nazi and a killer, the old man has escaped his past to move to the island and live out his life with his family. But is his past behind him. Can it shed light on the brutality of his murder? As Giorgos and his friend Michalis travel to find answers, they uncover the story of his life and even darker rumors of a crime more brutal.

With so many red herrings and possible murderers, how can the Police decipher the real reason for his death? Until they can separate the darkness the surrounds the victim and the sickness and brutality of his past, they can only assume to understand what has happened. There is a deeper and darker grief at work and they must decipher the past and delve into the present to discover if that past is responsible, or if a new wave of secrets is behind brutal murder.

The characters are mysterious, and stay to themselves. While they avow no knowledge of what has transpired, it is obvious they are in hiding for some reason. With no friends, they are an island to themselves. While all appear very innocent, Serafim takes us into their own secrets to flush out the possible motive.

The detectives are an admirable mix of determination and steadfastness. The addition of the priest brings a bit of humor to the situation as well as distraction, for he takes away a bit of the fear of the police. His help is invaluable to this story.

If you enjoy mystery and murder this is a rare find. The descriptions of Greece are wonderful and help to take you there as you journey into the horror and history of the Nazi regime. This would be a great book for a reading club with a great deal of background to decipher.

Leta Serafim is the author of the Greek Islands Mystery series, published by the Coffeetown Press, as well as the historical novel, To Look on Death No More. She has visited over twenty-five islands in Greece and continues to divide her time between Boston and Greece.

When the Devil's Idle Book Summary:

In the Book of Revelation, written by St. John on the Greek island of Patmos, it was said a pale horse would appear whose rider was death, others would cry out for vengeance, and the stars of heaven would fall to the earth. Death does indeed come to Patmos when a German tourist is found murdered in the garden of one of the island’s fabled estates. Yiannis Patronas, Chief Officer of the Chios police, is called in to investigate. He summons his top detective, Giorgos Tembelos, and his friend and amateur sleuth, Papa Michalis, to assist him. What the policemen discover will disturb them long after the conclusion of the case. Only six people were at the house at the time of the murder—the gardener and housekeeper, the victim’s son and his wife and their two children, a boy of seven and a teenage girl of sixteen. All appear to be innocent. But access to the isolated estate is severely restricted. Surrounded by high walls, it has only one entrance: a metal gate that was bolted at the time of the crime. Patronas can only conclude that one of the six is a killer. He continues to probe, uncovering the family’s many secrets. Some are very old, others more recent. All are horrifying. But which of these secrets led to murder?

Book 2 of the Greek Islands Mystery series, which began with The Devil Takes Half.

As always, Leslie, thank you for such an insightful, well-written review! :)