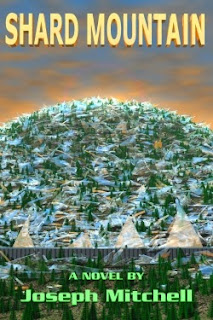 On his way to prison for a crime as simple as excess parking tickets created a nightmare for Charles Rogers. A computer geek to his bones he still does not understand the process that put him in this place at this time. Along with a few other prisoners and guards his life is about to take a turn into the ‘Twilight Zone.’

The accident came out of nowhere, as the prison van moved to pass a military convoy, a tanker lost control veering into the bus. The last thing Charles remembered was the jarring feeling and a sudden burst of some form of silver liquid covering everything. Hitting his head, he did not remember anything else, never dreaming he slept, unaware of time passing.

Charles first burst of conscious thought came with a painful light. Blinking against the sudden pain, he felt uncomfortable. Hearing a voice, but not understanding the message, he hears that he would be very stiff from the amount of time that passed. Finding a voice that sounds familiar, he finally opens his eyes, only to realize that he is in a nightmare. Some sort of giant pink humanoid creature was looking at him. As he backed up against the bed quickly, a human reminded him to take it easy. Moosh was a friend and had helped to rescue him and his friends. But who or what is Moosh?

The surroundings were unreal, all metal pieces and parts domed off, with wires and technology everywhere. Although is all seemed surreal, he could see the damage to the equipment and lab, which is what they appeared to be in. As he began to get a grip, he saw there were two others with him from the prison van. A young man named Jake and one of the prison guards, Parker Boll. The human rescuer said his name was Brother Kevin and reminded them they must get away. Apparently, Moosh had found this bunker and killed the two mutants that were intent on killing them.

Hurriedly pulling themselves together, this ragtag group of humans with their mutant rescuer prepares to leave the area. Not prepared for the devastation he finds outside the dome, Charles is horrified. The world is not as he remembered it. It is barren and hostile, with one definitive wonder that stood above it all, a mountain of glass. Known as Shard Mountain, it contained secrets sill not known after hundreds of years. Looking again in surprise at Brother Kevin, he finds out that he and his friends have been sleeping for 500 years. The world as they knew it is not the same, it is a dangerous world and they will have to make their place in it.

In Shard Mountain, Joseph Mitchell has fabricated an apocalyptic world. It is full of danger and surprise. Both human and mutants inhabit the earth, but there is more––much more. Charles, Jake and Parker must find a place in this world; most of the cryotes (the awakened) are not so adaptable. Waking in the year 2581 has both its advantages and disadvantages, weapons are few, drugs are easily accessible, transportation is with stagles, and a mind speak exists that only a few are capable of. Having been asleep for all these years our heroes find their minds have been experimented with, but have no idea how.

This is a story of challenges and changes, of finding your place and your courage in a world different from anything you have ever known. It is full of savage predators, mutants, living machines and just about everything you can imagine from an ‘Alfred Hitchcock’ nightmare. The characters are much as you would expect and yet they grow and expand to fit the rising needs. Love is in store as well, and we will follow this group of individuals on their journey to find their place.

This is a novel of extremes, but has a story line quite in keeping with the expectations of those that predict these very things happening. Sometimes fiction is stranger the truth and Mitchell has brought us a world of the future. Come and visit a world that is bold and crazy, but be prepared for a long journey. This book is not for the faint of heart, but is full of incredible experience.

I would recommend this book to the science fiction aficionada. Be prepared as this is a book so filled with story and challenges it is quite long. At over 400 pages, be prepared to bury yourself in time, to dig into the volume of material. It is fun and has vivid depiction; the words transport you to the very time. Mitchell has done a great job of fictional prose, with such remarkable detail as to make you find yourself in this future. Hang on for the ride.

This book was received as a free e-book from the author. All opinions are my own based off my reading and understanding of the material.