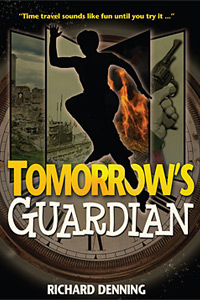 The nightmares continued night after night, Tom Oakley was always someone else in the dream. The faces were not any that he recognized and the time was somewhere in the past. Each occurrence dealt with the death of the person whose body he inhabited during the dream sequence. If that was not bad enough he was having issues when he was awake as well. He would seem to lose time, or find himself in a different place with no memory of how it happened.

He begins to think he is crazy, he is only eleven years old and his friends as well as the other kids are starting to look at him strangely. Even his parents are concerned. It is during this time he meets Septimus Mason and his life changes forever. Septimus hooks him up with Professor Neoptolemas, of the Hourglass Institute. It appears that he would like Tom to join the Tomorrow's Guardians.

When Tom declines, the Professor offers to take away his powers so that he can live a normal life, but first they need his help. He needs to help them rescue the three that he dreamed. Each of them is also walkers, out of time. In each instance, while they died in history no body was ever found. To the Professor this was proof that they must be saved.
Tom finally agrees, he wants to live a normal life, even though the time walking is cool, and he is very good at it. Making the plans to get the deeds done, Septimus agrees to help. There are other factions at work. Redfield is one of those who want Tom to fail. Tom is a threat to the course of history and there are those who feel he should have never been born. When he finally moves on to his next task he finds that Redfield will do anything to make trouble for him.

As Tom returns to his home, he finds he no longer has a home; his parents were killed in a fire before he was born and so he should not even be there. Yet he is. Because he was already in the future, he is still alive but has no parents or past. Can he go back to the past and save them? What will it take to rescue his parents and keep them safe in the future?

In Tomorrow’s Guardian, Richard Denning has put together a story of events out of British History. The time walking is done with an eye to reality, and the characters are engaging and sometimes wicked. Drawn from real life, the events are real, and Denning makes each rescue an adventure. There is danger and cunning inherent in each incident, keeping the action sharp and engrossing.

Denning’s characters are unique and fun, each with their own story. Tom is a great heroic figure for being a child and yet time after time he uses his ingenuity to outsmart the bad guys. He does not always understand the undercurrents of the episodes as they occur, but he invokes trust in those around him. He is mortified that he is the cause of his parent’s death, and will do anything to undo the terrible wrong that occurred.

Each of the other characters is a foil to Tom’s courage and ability. They are capable of acting on their own and yet when teamed with Tom they become major players.

I would recommend this to parents and young adult readers. It is an interesting and speculative look at time travel in a bit of a different light. It is adventurous as well as fun. The characters are interesting and the story will resonate with the young at heart. This would be a great addition to your child’s library.

This book was recieved free from the author. All opinions are my own based off my reading and understanding of the material.

Email ThisBlogThis!Share to TwitterShare to FacebookShare to Pinterest
Labels: Suspense, YA Fiction, YA Science fiction

Hopping over to say hi! I'm already a follower ;)

Hi, I'm a new follower. Please stop by my blog and follow me in return. :c)
http://temperanceblack.blogspot.com/