Lodestone (Book Two: The World of Ice and Stars) By Mark Whiteway 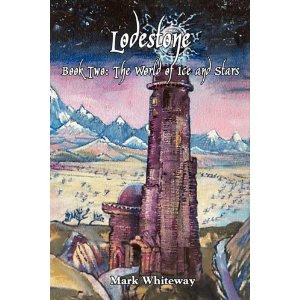 Lodestone Book II: The World of Ice and Stars

In Mark's soon to be released second book on the Lodestone series we again come upon our our unlikely group of heroes. They had added and extra member during the last part of the first book, Patris who becomes part of this team of misfits. Without giving the ending of the first book in the series, we find that  Shann and Boxx (the Chandara that has befriended them) are separated from the others in a different part of Kelanni. Shann is first captured and then befriended by Rael the assistant of a great scientist. Shann is both intrigued and irritated by Rael, which is her wont. She befriends him initially to use his intelligence and to get the use of the avionics that his mentor controls. She then begins in earnest looking for her group of friends as it it imperative that they continue their task in order to save their nation from destruction. Rael becomes enamored of Shann as she gets them out of several dangerous situations while searching.
What she finds in this new part of her world is that the separation of the worlds has created quite a breach of learning and that she and her friends will have to learn how to better defend themselves in this new and harsh environment.
Finally reuniting with her friends, we find that Shann has still not lost any of her animosity for Keris and that at every turn there is an over riding angst that colors their relationship. Knowing that they must put this aside they face a brutal test to their integrity in order to be considered by the ancient Kelanni as those chosen to save the world. Danger and surprises greet them every step of the way. Will they win at the end of the day? You will have to follow their endeavors.

I had the opportunity to read this next instalment and was pleased to see that is was as exciting and thought provoking as the beginning. I was thrilled to see the characters grow and mature in their roles. While that play between them is still there, it has moved into a different level and continues to keep you guessing. The addition of  new characters and their roles as well as the bleakness of their adventures keeps this book rolling at a fantastic pace. I believe that Mark's second book in this series will not let you down and you will be begging for more. This is a must have in your library.

This book was received as an ARC from the Author and I am receiving no compensation for this review. My opinion is my own based on my reading and understanding of the material.
Posted by Leslie at 10:10 AM

Isn't it great when the second book is as good as the first:)

By the way, thanks for visiting my blog and becoming a follower!

I read your weekly reflections and I thought it was great the way you spoke about authors and how worthwhile it is to help them succeed...