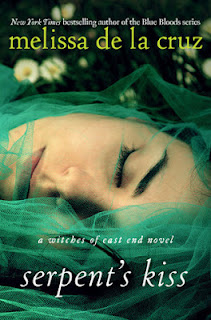 Serpent’s Kiss by Melissa De La Cruz is an exciting follow up to her prior novel in the series, Witches of East End. With Serpent’s Kiss we follow the continued exploits of the Beauchamp family, Joanna along with her daughters Freya and Ingrid.  After the restriction on using magic was lifted in her prior work, life has been interesting for the family. Back in their comfort zone after centuries of restriction, life is as it should be, or is it. Something is happening in Joanna’s house, her house keeper imagines there are ghosts or spirits, and Joanna is not sure. Is someone trying to contact her?
Freya’s life takes a turn when her twin brother suddenly shows up, and Ingrid is finally in love. But there is something happening to tear the family further asunder.  Why is Freddie back and professing innocence to a crime he was convicted of committing? Can Freya help him find the evidence he needs when he thinks the actual culprit that set him up is the love of her life, Killian Gardiner?
Will Ingrid’s ne love, Matt Noble, a police detective be able to reconcile his belief system with the unknown to him fact that he has fallen in love with a witch.  Tempers flare and anger threatens to drive a wedge into their new and tender feelings.
Throw another wrench into the making of a cauldron of trouble, but Joanna’s husband has now determined to come back into her life and that of her daughters. What more can happen that will stir the noxious mixture of fear, trust and chaos, especially when Joanna finds that a spirit is trying to contact her?  Is this spirit really looking for help or out to cause more harm? Can they find what is behind Freddie’s conviction and who is behind the other strange happenings in their beloved home?
De La Cruz has delivered a satisfying and enchanted follow up that takes you further into the background of a fascinating family of witches. Her characters are unique and have their own temperaments and drama which add to the life and characterization of the backdrop. Tie in some super sexy men and a bit of suspense and danger you get a very heady brew.
The family harkens from years of witch craft which extends even further back then the Salem Witch trials, although that time in history is part of who and what they have become. The love between the members is like all families, fraught with anger and misunderstanding.  Tempers and passions flare throughout, and trust becomes the buzz word. Who can you trust when you have been through the very fires of hell?
This would be a great novel for a reading group. There is suspense, danger, mystery, and a few of the things that go bump in the night. The romance is hot and the love is tender. There is something for the most passionate of readers, a satisfying quality that brings closure. This would be a great book for your library.

This book was received free from the authors publicist. All opinions are my own based off my readind and understanding of the material.
Posted by Leslie at 10:07 PM No comments:

In Adam Orser (Chronicles of Evolution) by Daniel Armand, we are in store for a highly challenging look at a new plan put in place by the Cosmos. When a young 9-year old girl is abducted the country goes on an all-out hunt to find her before the worst happens. Time is ticking and her chances of survival diminish as the days drag on. A young Rookie detective, Louis Collins stands ready for the challenge of finding her. Can he do what others with more background have been unable to do, find a reason for her abduction and a location of where she is being kept before it is too late?

Adam Orser is just an ordinary young man with a great outlook and in love with Jazmin. He is steady and gifted and working in a field he loves. Ready to make Jazmin his wife, he realizes that not only is she everything he has ever wanted but that her young daughter Carly also holds his heart, she is very like his own, and only ads icing to the decision. Ready to pop the question, he is distracted and decides it will wait. Heading to work he is injured in a car wreck, putting him in a coma, barely clinging to life. Can he find the will to survive?

Adam is the unknowing hero and has already come far along on his path to enlightenment. It is only during his coma that his past life regression is allowed to be remembered. With his deceased father as his guide he begins to receive training to help him get ready to help the army win a new battle in the never ending war. The elders have broken tradition in an effort to challenge a deadly evil, they only take their warriors from the deceased yet Adam is not dead. They have chosen to pull one from the living to help them in this time and this journey.

Jazmin is on the outside praying for Adam's safe return. Gathering his mother to her fold of friends, she finds she is in danger in a way she does not understand. Meeting an old flame, unaware of Adams true feeling, she finds herself fighting her own battle for her feelings. Will she remember what it is that Adam means to her? Will he be able to return to her from his coma and his own secret quest in order to help her realize the truth of love?

Armand has given us a smorgasbord of happenings that stretch the imagination. The development of his stasis for Adam’s true meaning is very in-depth and thought provoking. The revolving of Adams soul, as he transgresses into another realm is deep and meaningful. He is allowed to remember his past and his present in an effort to challenge the status quo. He is needed in this world to challenge an evil that has transcended its own journey and broken its own bonds. There is evil loose in the world that is beyond the reach of the usual warriors. Adam is their chance to make things right.
The circle of hope rests in Adam Orser, Jazmin and Louis Collins and as we learn more about their characters, Armand begins the delicate touch of weaving the strands through the different lives that begin to tie them together in a way that seems effortless. Initially there is confusion as to what each player brings to the whole, yet as the stories meld together they create a continuation which adds a solemn and unique twist to this work.

If you enjoy karma and angels, you will enjoy this work. There is suspense, danger and death, which give it a darker feel than many of the works along this genre. If you are a fan of the paranormal and enjoy a good mystery, this will fill the void. Daniel Armand has given us much to think about.

Adam Orser: The Chronicles of Evolution

Adam Orser seems to be a regular guy, leading a fairly successful life in Toronto as a psychologist with a loving girlfriend, Jazmin.

But there is nothing ordinary about Adam.

Fate interrupts his planned marriage proposal, and a serious car accident thrusts him into a metaphysical reality behind a deep coma that holds his physical body in check. Through an advanced system of training and evolution created by the celestial realm, Adam is called to a dangerous mission with profound implications for the world he knows, and life and death consequences for one missing nine-year old girl, who is no ordinary kidnapped child. Fantastical forces are at work on both sides of the veil between the world we recognize and those yet to be discovered.

Destiny compels Adam to freely choose the part he will play in a no-limits competition between good and evil. Questions of existence, causality, and truth converge as Adam struggles to find his way back to Jazmin and a life that will never be the same.
Daniel Armand Bio:

Daniel Armand lives in Toronto, Ontario. His inspiration behind Adam Orser: Chronicles of Evolution originated during the summer of 1983, after a near death encounter offered an incredible insight into the obscured aspects of life, love, and the progression of the human spirit.

Daniel is currently working on the next novel of the Adam Orser saga. "I truly hope this novel will help inspire readers all over the globe, to embrace their spirituality. It is through clarity of mind and understanding that we may one day 'bloom' into harmony and unlock our limitless potential." 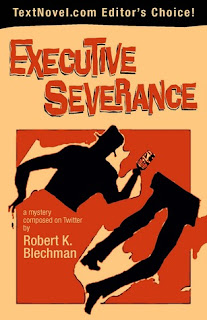 Is it truly possible to write a novel using 140 words or less over an extended period of time? Obviously it can be done, but would it be readable and make sense. Would it flow in such a way as to peak your interest?
Well if you enjoy high slapstick comedy, and a sense of the pun, look no further than Executive Severance by Robert K. Blechman. Writing a novel using twitter seems such a daunting task, and yet Blechman persevered and did it with certain panache.
Take a B-grade movie and add a bit of ”Mystery Science Theater” for poking fun and you get a slight definition of how this novel reads. A murder mystery full of oddballs and skullduggery, goofy scenarios and just a jumble of happenings, the tweets are very readable. At times the writing is a bit incomprehensible due to some of the characterizations of the protagonists but you find you are soon able to decipher the strange writings.
Almost comic book style you can visualize the characters with the ever present bubble from our days of reading them, the flow is along the same lines. The prose is written in a steady even pace, even with the 149 or less characters needed in order to be tweet-worthy.
If you love fun and comedy, as well as slapstick humor this is an insightful way to get your fix. The story while just a bit absurd is also a mystery, a bit of a thriller and much, much more. To use such a forum and create a work that reads so well requires both talent and patience, we see that with clarity in this strange and witty whodunit.
If you are a twitter fan you will find much of the novel also twists around some of the issues with tweeting, and you will find some hilarity as well as possible frustration from your own experiences. This is a tickle your funny bone experience. Reading some of the tweets during parties and group events would be a fascinating way to break the ice in a way that would create a buzz. Try it on for size and see what you think. This could become a cult favorite.
Rating 5/5
This book was received as a free copy from the author. All opinions are my own based off my reading and understanding of the material.
Posted by Leslie at 1:24 PM No comments: