Revenge of the Mad Scientist by Lara Nance

Article first published as Book Review:Revenge of the Mad Scientist: Book One by Lara Nance on Blogcritics. 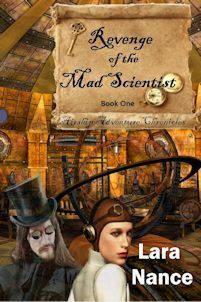 A bit archaic yet eminently popular, Steam Punk is a genre of writing all on its own. Full of inventions or the possibility of inventions from the early 19th century, writers have taken to using the backdrop for novels of adventure and mayhem.
In Revenge of the Mad Scientist by Lara Nance we are introduced to a world of steam power and gaslights, one of differing nations vying for supreme power and the creation of chaos. When the Lord High Minister of Urbannia is kidnapped just as their country is on the verge of signing a peace agreement, blame is laid to rest on Gandiss, the very country in question. The kidnapping is handled during the celebration of the event, directly after the Minister’s daughter, Lady Arabella is introduced to the Lord of the realm in question.
Once the kidnapping comes to light, Lord Ismatan is rushed away by his men for safety reasons, but not before he assures Arabella of the innocence of his country. Giving her a ring to wear and use in case of need, he disappears before he can be arrested for the deed. Arabella is the only one who believes that Ismatan is innocent while all suspicion falls directly on him and his country of Gandiss.  Knowing her father’s life is in danger, she realizes that she must be the one to react.
Her faithful servant and her young charge, a boy she rescued from abusive behavior because of his difference, become a part of her retinue in her quest to find her father. It seems to be the only solution to head off a war between the nations, and Arabella is well aware that no one else is looking in the right direction.
As she finds the captain of a Steam airship that is willing to take her to her destination, she unintentionally sets into motion a series of events that will change the lives and destinies of all involved. She herself is kidnapped by slavers and escapes with another only to find that her fellow abductee is related to Lord Ismatan of Gandiss.  The coincidences continue to pile up as danger falls around the small group that is beginning to grow.  After the crash of her hired aircraft, fate puts another complication in her life. The only ship now available seems to be run by the man who left her at the altar years before.
Can she trust her fate and the fate of her father to such a ruffian? She knows she has no choice; her father’s life hangs in the balance. Can this band of misfits rescue her father and put a stop to the war that is now brewing?
The genre of steam punk is exciting and interesting. Nance does a great job of modeling the circumstances and describing the machinery and inventions that I find very interesting. In some novels the events of the story overshadow the background, yet Nance continues to interject with the variety and description of the steam punk props, whether it is the machinery, the clothing or the other interesting gadgets that strike our interest. At the same time she weaves a story that moves forward with purpose.
Interspace the entire event with knives and guns that also set up visuals, the novel moves at a smooth pace. There is certain believability about many of the modes of weapon and transport, much like those that carried the likes of Jules Verne on his fantastic voyages.


Nance also delivers on characters that have flaws but draw you in to their issues and problems. You find yourself cheering as they find ways around the foibles that exist.  If you enjoy Steam Punk you would enjoy this world. It is a fascinating journey into the unknown, and has the ability to take you there.
Rating 4/5
This book was received free from the author. All opinions are my own based off my reading and understanding of the material.
Posted by Leslie at 4:06 PM 1 comment: 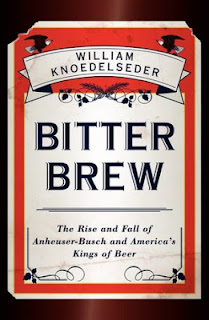 Known as the King of Beers, Budweiser was not always the brew we know it as today. Just before and a short time after prohibition, Budweiser like many other beers of the time was bitter and weak. Only after the Generation of Anheuser-Busch and their involvement in the repeal of the laws of prohibition, was an all-out effort made to take a brew and make it stand out from the rest.
In Bitter Brew by William Knoedelseder, we follow the years and history behind the brew, and yet the story cannot be complete with the family and the foibles that were a part of this small kingdom.  The year 1933 is when prohibition was abolished and the golden years of Budweiser and the reign of the Anheuser-Busch family.
Adolphus Bush, a German immigrant, worked diligently to save up enough money to open a brewery supply company. His fortunes changed when an early customer, Eberhard Anheuser came into the brewery though a defaulted loan. When Adolphus married Anheuser’s daughter Lilly, the dynasty was set, although there was no way of knowing this at the time. Adolphus became very involved in the brewery and became the first brewer in the United States to pasteurize his product, giving it a longer shelf life without fear of spoilage.  He built rail ice- houses to move his product giving him the ability to move his beer longer distances. He also began buying up some of the local taverns giving his beer an undisputed home. All of this helped them to become the nation’s first national brand of beer.
Prohibition was brutal for all breweries and Anheuser-Busch was no different. The family though held the ear of the president and was very involved in the political arena. With the death of Adolphus, August Sr. took the reins of the company.  Never giving up the fight for the repeal of prohibition and their fortunes dwindling, they continued running the business and keeping people employed though the worst of time, making a name for themselves.
Bitter Brew, though is about the family and their lives, and their interaction in the lives of others. In the golden years after the beer wash changed using a new recipe, the business became about the people that worked in the breweries and the business. We follow the ups and downs of the family itself but also that of friends and workers.  There was something magical about being involved in the Budweiser family; a caring and reaching out to those that were a part.
This is then also about the ending and the changing of the guard, and the difference of a company that had been a part of the American landscape and involved in the backdrop of the prohibition era. Looking back at the heartache and heartbreaks, like looking backwards from a kaleidoscope, where all the disjointed pieces still fit together within the whole, and how the changes of venue no longer held the same heart.
If you are interested in history and the growth of a dynasty, you will enjoy this material. I found it quite fascinating reading, and felt sadness in the pit of my stomach as I neared the end. The story includes so much, including the commercial success and personal growth to the beginning of the Clydesdale as the mascot of the company. It also delves into the darkness of both privilege and power.
A marvelous book for the library, this would also make a great reading club or discussion group addition. It is full of heart and feelings as well as the ending of a Golden Age.
Rating 5/5
This book was received free from the Publishing company. All opinions are my own based off my reading and understanding of the material.
Posted by Leslie at 2:25 PM 1 comment: