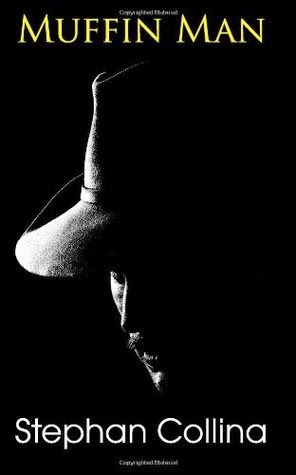 The threat of terrorism is often realized throughout the world.  Many times these threats come from outside sources, different countries with differing beliefs and wants. Yet there is also the danger lurking within the countries, those ideas and beliefs that run a divergent path to what the government delivers. Nestled within the safety of being a citizen, the terror radiating from the internal patriots can prove more deadly than that from distant shores.
The Muffin Man by Stephan Collina, takes us on a collision course of betrayal, love, drugs and political manipulation.  Following a premonition of the President’s wife, a chain of events is set into motion and will rock the country to its very fiber. The events begin in strange incidences that seem very separate on the outside, yet begin to weave into delicate patterns that strengthen as time moves forward.  Interactions begin that tie and then later bind, guiding and directing an eclectic group of individuals to a common goal, one that is known to only a select few.
Acting with impunity and given free reign, nothing is considered sacred in the form of moral rectitude. Life and death hold little meaning, yet jealousy and rage burst forth with vigor, threatening to topple all the pieces already put into place. Betrayal carries a sentence and yet depravity guarantees its place.
In an intricate and deadly pattern, Collina takes us on a journey of time and gives us the characters of a nation diverse in history. The flaws and human emotion create a genuine feel while the anger and mistakes pull you forward, holding your interest.  The intensity builds slowly, and while there seems to be some strange and out of cycle distractions, Collina slowly pulls the rope allowing the curtain to raise just inches at a time, drawing out the drama.
While I found the buildup and foreshadowing to be slow reading, the events can only come together in such a way.  If you enjoy terror and history, political intrigue and human interest you may find this a book to look too. The surprise ending was a bit of a shock and I was not comfortable with it, yet as the plot settled I could finally understand the events. I enjoyed the interplay amongst many of the characters, and felt they seemed real. The events could carry plausibility, yet one can be glad of the fiction behind the story.
Some might find the telling of the story offensive, and if you are not comfortable about terrorism or internal strife, you might take a pass.  However if you enjoy a tale of intrigue with the possibility of immense and sinister repercussions, you have found the tale to take you there. This would be a strong book for a reading or discussion group, full of possible dialogue.
About Stephan Collina:
Stephan Collina grew up in the 1970s: a troubled time of recession, poverty, industrial disruption, political tension and terrorism. But for younger people, it was also a post-1960s wide-flared, drug-enhanced and extravagant-haired innocence.
Stephan later became a prominent businessman, acquainted with a number of high-ranking politicians. Stephen ran international technology businesses, spending a great deal of time in the USA and various European and African countries.
The Muffin Man grew from a combination of these unique experiences: his early knowledge of the sometime innocent business of drug dealing (although he never inhaled), and of the much dirtier businesses of covert political and military action, and of international business practices.
Stephan's first novel explored the nefarious and complicated emotional and sexual relationships of a remote village in Wales, where he had spent his early years.
Stephan holds a degree in Philosophy. He is also a qualified commercial ship's captain. He now lives quietly by the sea, and concentrates on his writing and related filmmaking activities.
Website: http://www.stephancollina.com/muffinman.html
Facebook: https://www.facebook.com/stephan.collina Twitter: https://twitter.com/stephan_collina
Posted by Leslie at 6:25 AM 1 comment:

Twelve to Murder by Lauren Carr 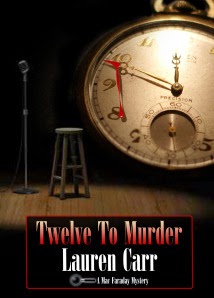 In bizarre circumstances, tragedy can be much stranger than fiction. When you bring in a ‘has been’ child star, and a whole lot of drama, fireworks flare in spiraling patterns, leaving you to wonder how to find the true beginning of events beneath that very same performance.
In Twelve to Murder by Lauren Carr, Mac Faraday is drawn into a situation of strangely surreal circumstances. The former child-star and idol, Lenny Frost, becomes the prime suspect in the murder of his prior agent and her husband.  Lenny has taken hostages in a local pub and demands that Mac find the killer. He has twelve hours to find the responsible party before Lenny begins killing hostages.  Mac finds he too must play a part as he tries to ease the tension, and get hostages released. With all the food and drinks they can handle, he is having difficulty getting his job done.
Questioning Lenny, he feels he has some possibilities. How could Lenny be responsible and yet maintain his innocence by taking lives to prove his point. Mac has a very limited time to find the answers to the murder, and keep his client from killing innocent hostages. As the drama and strange events continue to weave throughout the story, Mac is at odds with himself.  Can he find the murderer in time to stop the freight train that will not stop until it derails the life of Lenny Frost?
Carr has brought us an entertaining mystery and comedic intrigue, making you guess till the very end in this tale of murder. Her characters are just what you would expect to encounter in some of the same circumstances and you find then either quite likable, quirky or just possibly deadly. Yet who is who, the directions are coy and confusing sending you into differing thoughts of possibilities.
Mac Faraday is an excellent character with just the right amount of emotion and humor. He is also very responsible and cares deeply about those he encounters.  A few flaws and a huge heart help him to win your thoughts and you hope he finds the answers.
If you enjoy mystery and comedy you will find this fills the bill. With odd duck characters and potential possibilities everywhere you will want to keep reading from start to finish. While not the usual book club type of read, the humor and sensitivities would create a great reaction and discussion.  Carr is an author to watch for and Faraday is investigator of worth. I hope they both show up often.
Rating 3/5
This book was received free from the author. All opinions are my own based off my reading and understanding of the material. The mind seems to play a strange yet protective role when stress is too much to deal with. What sets off the protectionism is variable and different within individuals. Only those who have truly dealt with the fugue and disjointed thoughts and memories can begin to understand the feelings of others who have evinced the same type of shield.

In The Headmasters Wife by Thomas Christopher Greene, we are taken on a strange and unexpected journey. When Arthur Winthrop, Headmaster of Lancaster School, is found wondering naked in Central Park, he is picked up for questioning.  It is here that the story of his rise and strange undoing is brought to life though his own self narration to the police department.

As his story unfolds you find yourself immersed in his memories, at times able to comprehend his actions and at others astounded with the attributes he is recalling. We are taken into the life of his wife as well as his tenure within the institution. The twists and turns keep you reading wondering how a life so full of promise has become so unhinged.

Greene has given us a story of amazing latitudes, making us think of how we would react in similar situations. While the story is totally different, there is a likeness to 'A Beautiful Mind' that teases at your senses.  What is it about certain stressors and possible defects that turn the synapsis of the brain into a fighting machine, willing to take on all contenders?

The characters are such an interesting mix, and throughout the work we are given glimpses into the past, the very issues that have brought Arthur to this place in his life. The twists are amazing and the ending is unexpected.

If you enjoy novels that make you think, those that take you into the unimaginable you will find this to be a terrific find. There is mystery and romance, as well as friendships and hidden agendas.

This would be a terrific book for both a reading group and a book club, with a wealth of information to utilize to keep the discussion lively.

This book was received from the authors publicist. All opinions are my own based on my reading and understanding of the material.
Posted by Leslie at 8:05 AM No comments: