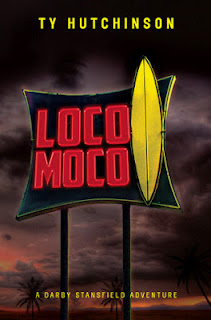 Doing the wrong thing for what seems to be the right reason is usually the first indication that trouble is on its way. With a mindset that often runs contrary in such a fashion, it is easy to see where the expression, "trouble is your middle name," came into being.
In Loco Moco by Ty Hutchinson , Darby Stansfield again determines that he will give up his unsavory clients and go straight. With his plans to spend some time in the beautiful paradise of Hawaii with his girlfriend Izzy, he is ready to settle down and he is confident that she is the girl for him. Convincing her to take time away from work so they can spend some quality time in the island paradise is the easy part. Even as he begins to relax in his new accommodations trouble is brewing. Little does he know that eyes are on them––hot and angry eyes? Someone is desirous of everything he has, but Darby is still unaware of the danger.
Surfing is in their blood and Darby and Izzy find they must get the permission of the island surfing gang in order to invade the waters for their own surfing fun. As they receive the okay, Darby finds himself again in a situation where he needs to decide right from wrong. He is known for his sales to the mob, and this group is aware of his fame. The money is more than he can make himself give up. However, this small gang of thugs is more than meets the eye. Trouble is brewing, and when Izzy is attacked, Darby is not sure where to turn. One of her new friends on the island gives her some advice, while a few of Darbys friends have their own ideas.
When a young girl goes missing and ends up murdered, and then their bungalow is broken into, Darby takes matters into his own hands. Hiring a P.I. and installing a state of the art alarm system, they begin the task of tracking down leads.
When Izzy accepts his proposal of marriage, Darby finds out for the first time that her father is in the FBI. He is no long quite so enamored of his own choices. Can he keep his involvement with the mob from her and her family? Can he safely leave Izzy in their Hawaiian retreat as he treks back to the U.S for his business meetings, or is the danger closer than they know? When Izzy disappears, Darby finds that he is under suspicion. Can he help decipher the clues before it is too late for her?
Hutchinson has a canny way of taking desperate situations and finding the humor in them. His character of Darby Stansfield is quite cunning in a somewhat shady and slapstick way. He is easy to like and while he certainly plays in the big leagues, he has a charm that takes away the sleaziness. Certainly from the time his character was introduced in Chop Suey, he has evolved from a lowly bottom feeder of a salesman to one of the top contenders. His charm and cunning has grown as well, but there is that bit of naivety that keeps him honest. (In an odd sort of way)
His stories are well thought out, and the action is quick and easy to follow. The interesting element of this series it the fact that you rarely figure out the solution until it is there before you. The characters that interact with Darby are well composed and his friendships are deep. He has a compassion that keeps you trusting him even though he is quite a bit of a rogue.
If you enjoy action and comedy this is a great series, one that will keep you entertained. If you love suspense with just a bit of the absurd, this is the work you are looking for. This would be a fun book for a reading group, one where you could discuss the odd merits of the decisions that are made throughout.
Ty Hutchinson just keeps getting better.
Rating 4/5
This book was received free from the author. All opinions are my own based off my reading and understanding of the material.
Posted by Leslie at 7:40 AM No comments:

On The Bayou by Sean Patrick Bridges 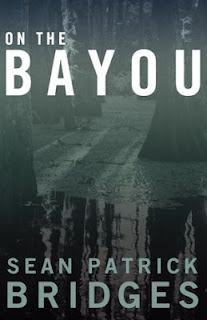 In a situation where you find that you may be one of the good guys, but that those that would have your back in the usual course may be on the take, how do you move forward? When your entire team is killed and you are the survivor, how do you make others understand, rogues in law enforcement are often hard to spot. Yet when your career is on the line how would you move forward, when proof is beyond your grasp?
In On the Bayou by Sean Patrick Bridges, we follow that path of Special Agent Jennifer Nash as she finds herself in such a situation. After her entire team is killed in a shootout she is put on leave. Given an opportunity to redeem herself as a ride along with a DEA group in the Swamps of Louisiana, she is out of her depth quite quickly. Not only is her team attacked again, the villains from her first stake-out, where her partner and group were killed, appear to be involved in this situation as well. She is forced to rely on men that do not trust her, and are not aware of her background. Fleeing deeper into the swamps in an effort to save themselves and put an end to the killing, they only find themselves deeper in danger. The killers live amongst the swamps and use the creatures that lurk there as their toys and tools of punishment. Not knowing who to believe in even as each of her new team are killed and mutilated; she takes a stab at Corey as someone she can trust. But even he has his secrets as they begin the long journey to freedom.
Will they survive another day, or will the cartel win in the end. Can they find and stop the corruption from within or is it too late for them as well?
Bridges has given us a slow build up to a frenetic showdown. The action is palpable and keeps you turning the pages. The killing in the beginning is not as climactic as expected—much too soon to get close to the characters. But as Agent Nash moves through the bayou with this new team of defenders you find your favorites and hope they are not the bad guys.
Surprise is evident at every turn as you find courage where you least expect it, yet you also find madness and despair. Some of the action is brutal and deadly, and often just plain cruel, yet the story keeps bringing you back. How will it end, who will survive? Who is really the rogue that turned on the team?
If you enjoy danger and suspense you will enjoy this work. I found the buildup slow and was not sure of my reaction, but once the action starts you find the background to have been necessary to guild the lily––so to speak. Bridges has a talent for bringing in the unexpected and for finding the cruelty that exists in those special few individuals. This is the second work I have read of his, and he often borders on horror, with the madness and ideas that his characters create to keep themselves amused.
There is no lack of action or questions as you delve into the darkness and passions of the Cajun life. The darkness and secrets of the bayou make their way into your view with the depth and depravity that seems just short of horror.
If you worry about swamps and gator country, don’t stop now.
This is one that will keep you holding on to those fears.
Rating 4/5
This book was received free from the author. All opinions are my own based off my reading and understanding of the material.
Posted by Leslie at 5:31 AM No comments: