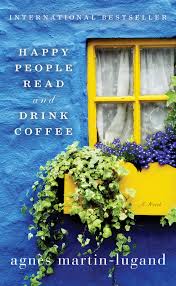 In Happy People Read and Drink Coffee by Agnes Martin-Lugand, we are introduced Dianne, a young woman who has lived a wonderful life. She is married to the love of her life, has a delightful young child, and owns a charming literary café in Paris. In the blink of a moment everything changes when her husband and child are killed in a car accident.

Suddenly everything has lost all meaning, and depression becomes her norm. Both her parents and best friend continue to keep after her to go back to work, and try to move on. For her there is no way to put the past behind her, and she is done with being pushed when she is not ready. She knows she will never be ready, and decides on a whim to leave her home and head to the Irish coast, a place her husband had always wanted to visit. The objections of those closest to her make no difference for she has made up her mind. She is determined to heal in her own way, and rebuild her life on her own terms.

Here she meets an abrasive and angry photographer who dislikes her from the beginning. She has no idea why he is so set against her, but she really doesn’t care. She will not be bullied by the likes of him or anyone else. Yet as they are thrown together they find they have more in common and as the days stretch on, Dianne realizes that she has fallen for him. Romance is re-kindled for both, but it is time for Diane to return home and pick up her life. Will the romance be enough to sustain them?

This is a powerful story of love and loss and how life moves forward often of its own accord. Both tearful and uplifting this is a exquisite story of re-growth and renewal after tragedy. Lugand takes you into a tragedy and makes you feel the pain. She then give you romance and hope which makes this work one of believing that love brings its own healing, and memory of love past doesn’t need to destroy but can  help to build a bridge to that future.

If you enjoy romance and growth you will find this an uplifting story beginning with tragedy and yet moving beyond, finding a way to love and trust again. A story of finding yourself when it seems that all is gone.

Posted by Leslie at 6:42 AM No comments:

The Ex by Alafair Burke

Posted first to Blog Critics as Book Review: 'The Ex', a Mystery by Alafair Burke. 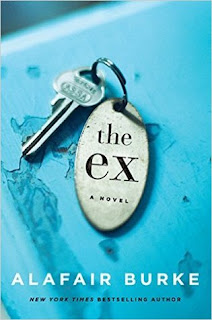 In The Ex by Alafair Burke, we are taken on a journey where both the past and present collide in the arrest of a Widower, Jack Harris, for a murder he claims he did not do. His past relationship with the first love of his life is soon to become his lifeline to reality as he begins a fight for both sanity and freedom. Having lost his beloved wife three years previous, he has finally thought to begin again. That is when his life again begins to unravel.

His only help is with the woman who first broke his heart, Olivia, one of the city’s best criminal defense attorneys. Yet can he convince her of his innocence? The circumstances surrounding the murder point directly to him as the killer.

Olivia wants to be there for him, she believes she knows him well, but time could have changed him, and the death of his wife may have been a catalyst that sent him over the edge. One of those killed in the shooting is a part of a lawsuit that involves the death of his wife, and she has some doubts.

She finally decides she is will to representing his as a way to make up for her own past with him and her own guilt in feeling somewhat responsible for his state of mind.  But what she finds is that not everything is as clear as it should be, and she may not have known him as well as she thought.

Can she help him without getting caught up in her own past and lay her own demons and doubts aside. She refuses to believe his guilt, but what if she is wrong.

Burke takes us into the lives of everyday people and sprinkles both doubt and belief, alternating between both past and present to bring us a story of hurt and anger, as well as love. Her characters are full of both flaws and mistakes, making them very likable, and drawing your involvement.  She weaves both past and present together in such a way that you feel as though you have always known the characters and even understand the motivations.

If you enjoy mystery and investigation you will find this to be a great work. If you are looking for a book to curl up with that keeps you entertained then you have found it. Burke has done another great job of bringing her characters to life.

Posted by Leslie at 8:55 PM No comments: 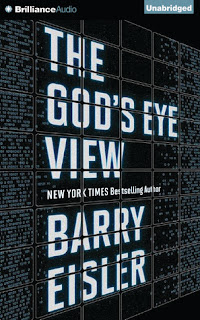 A conspiracy of sinister and dangerous proportions will keep you riveted when reading The God’s Eye View by Barry Eisler. NSA director Theodore Anders is convinced the only way to keep America safe is to monitor and surveil every email, phone call, and internet connection. Our safety is his utmost concern.

His personal assistant Evelyn doesn’t care about any of that, she is just learning a few things that are not entirely comfortable and only wants to continue working in order to take care of her deaf son. Initially she is open and direct in her communication with her boss, but she now feels a bit of fear, without quite understanding why.

He leads her on, knowing that at some point she may become a liability. For now though she keeps his office running efficiently.

Things change and become even more terror filled when Evelyn finds evidence of a NSA program that is code named Gods Eye View. With this discovery she also finds out about the mysterious deaths of a few journalists. As her job takes her deeper into jeopardy she is unsure where to turn, as now she feels danger creeping into her own life.

As time ticks away and the possibility of whistle blowers finding more information she is dragged further into the dangerous world of political mayhem. Is the giant deaf man who befriends her son a friend or foe? Can she find out before the unimaginable happens?

Eisler takes us deep into the world of politics and gives us a number of ‘what if’ scenarios.

Conspiracy and conspiracy theorists often evolve when questions remain without answers, especially in the hidden agendas of the government. Leaks such as those released by Snowden keep you on the edge of your seat, and the author’s characters drag you in. You will find it difficult to decide who are really the good guys and the bad guys. There is a psychological terror threaded throughout as you begin to dread the outcome along with his realistic characters.

If you enjoy political thrillers and conspiracies this is a must have for your library. One read through is simply not enough, you will find yourself going back for another read to catch up on all the nuances that may have been missed. Prepared to be terrified and looking over your shoulder as you catch up with The God’s Eye View.


This would be a great book for a reading and discussion group. Conspiracy invites dialogue and controversy.