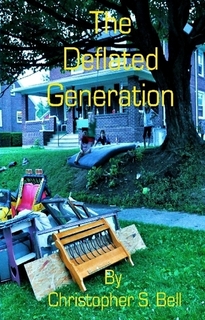 I find books that deal with the end of the world somewhat ironic. Obviously it has not ended or we would not be engaged in reading a story about the aftermath. Many do however; deal with the end of the word as we know it, which is an altogether different thing. In The Deflated Generation by Christopher S. Bell we follow the lives of two different groups who have somehow managed connect with others for short amounts of time, often to ill effect.

Each set of characters is looking for a way to make sense in a world, mostly empty of adult guidance and an oddly energized yet laid back existence. Coming of age in such an empty world is difficult and deciding to move and find others offers a ray of hope. Each faction is aware of their own mortality, the aftermath of the destruction left them all with damages, those small invisible forces working from the inside and on chromosomes, leaving damages no one else could see. Knowledge of the damage and resulting aftermath creates a dangerous place to those who still maintain their sanity and care about living and moving.

Maggie Strayer is trying to patch her life together, and she is as amazed as the rest of the town when Mitchell Graft, one of the older residents, just ups and leaves without telling anyone. It is scary and out of the norm. Not everyone remembers the war, or the horrible things that happened after, but Mitchell was one of the survivors. We follow the life of these two survivors separately as they try to find purchase in a world torn apart.

Waiting at all times for something further to happen, alcohol and drugs including marijuana is the choice to help most of those left, through the day. Even those forms of refuge do not offer them any feeling of safety. After Mitchell leaves, some of the others decide to take a chance to see what else is out there, if there is a better place, with more hope. Rumors of other pockets of population are rife. Can Maggie and her friends find a new hope in a different city? And will they ever find out what happened to Mitchell?

I have read Christopher’s work before and found his humor to be quite amazing. I, however, struggled through this story. I had difficulty deciphering which group was interacting at the time, the changeover often happened a little too abruptly. I did not really get the gist of the story and found it to be a bit depressing. Murder, theft, drugs and alcohol seemed to be involved throughout. While hooking up and dating are common in our society, and will always be, it seemed a bit more desperate and oddly uninspiring in a world where most of the inhabitants lived under a cloud. Both of continued possibilities of further damage and the actual cloud of being high seemed way more eventful.

Danger was found just about everywhere, life did not seem to have much meaning. I could see where this could become a possible cult type of fiction, after all I did not really get Pulp Fiction either, but this was not the book for me.

This book was received as a free copy from the author. All opinions are my own based off my reading and understanding of the material.
Posted by Leslie at 8:10 PM

It's coincidental that one of the last books I read was about the end of the word. "The Lost Angel." Like you, I have a hard time dealing with end of the world books.
Mike