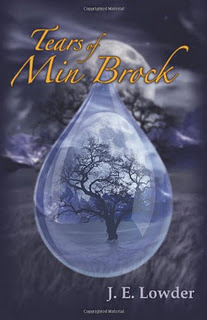 Some of the best stories I can remember are those that take me out of my own existence and insert me into a world I have never known. I get to become a part of the story and the adventure and excitement also becomes a part of my own.

In Tears of Min Brock by J. E. Lowder, I have again found one of those fascinating epic fantasy worlds that are daunting and dangerous, yet broodingly beautiful as well. Set in a time after the Dark War, Lowder brings about an adventure that is frightening and visual. His captivating world is filled with the darkness and dread and full of the creatures that cause fear, and yet throughout the story weaves an intricate pattern of light. He takes his characters into untold highs and lows of problems and beliefs as well as concerns for their families. When the darkness fights the light, we often rely on the light to win, yet what happens when it doesn’t? In a world where a darkness rules, Lowder has brought us whispers of light, and a fierce young heroine. Can a young girl along with her best friend bring about the destruction of darkness, or is the light that whispers to her just a figment of her imagination?

In a deep and mysterious world where evil has appeared to win the war, Lowder brings us a story of hope and longing. His descriptions and embellishment’s are both enchanting and dangerous. His young hero, Elabea can hear the whisper of the lightness from the land of Claire that had been rumored to have been destroyed by the Ebon, during the dark war. Elabea is slated as a storyteller, one of the great magic users of time, but will she live to fulfill her destiny? She is young and yet malleable, but her belief is deep and profound.

Her best friend Galadin too begins her journey with her, but he has his doubts. He does not hear the whispers, but he does believe in her. Both of their fathers fought in the war, and were now different men from the proud warriors they once were. Galadin dreams of becoming something more. He knows he will follow Elabea where ever she leads, and soon he too finds his place in this story.

They are joined by others, an old storyteller from before the war, as well as a hero many thought had died during the war. But can they escape the false whispers of the cauldron. How to they decipher which are the true ones, and when they do, will it be too late?

I enjoy fantasy and I found myself unable to put this one down. The evil and danger are inherent, and yet the light finds a way to twist throughout in thoughts and actions. The whisper is exciting and the fight and chase scenes hold you spellbound. In a world where the very darkness seems to hold sway, brightness seems to burn through the pages.

If you love the power of words and enjoy epic fantasy this is a world waiting for you. Our heroine is a 14 year old girl and with her is her young best friend, so while this could be construed as a YA Fantasy, make no mistake, it heralds the themes and storyline that cross over into the adult experience. I found this to be one of my favorite books of the year, and am looking forward to the sequel. Lowder writes a story that does not disappoint.

This would be a wonderful work for your budding reader and one for your long-term reader as well. A wonderful book for your library, Lowder has ratcheted up a notch on the playing field.

This book was received free from the author. All opinions are my own based off my reading and understanding of the material.
Posted by Leslie at 6:06 PM

I've seen this book, and it sounded very interesting. I'm really glad that you enjoyed it, and thanks for sharing!