Grail Mysterium, An Adventure On The Heights by Thomas Kaplan-Maxfield

Article first published as Book Review: Grail Mysterium: An Adventure on the Heights by Thomas Kaplan-Maxfield on Blogcritics. 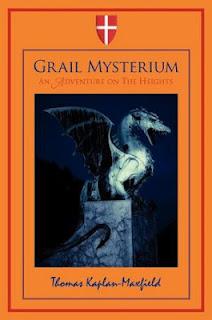 Magic and Science, can these two subjects actually be related and interchangeable, or is there any relationship at all between them.
In Grail Mysterium, An Adventure on the Heights by Thomas Kaplan-Mansfield, he brings us a book touted to be somewhere between Harry Potter and the Da Vinci Code. I enjoyed both of these works to a degree and was interested to see how this work would represent the connection.
In Boston College a group of friends are beginning to notice strange happenings, students with high marks are dropping out, illness is running rampant, and Jack Knecht a senior psych major thinks he has seen a ghost. Not that he is sure, but he saw a hooded figure pass into a locked area of fencing and enter a building which is locked up for remodeling. Checking the locks to make sure, he is just a bit uncomfortable. Known as somewhat of a dreamer, he is a huge Hogwarts buff and believes in the idea of magic. He knows his friends will not believe him, and his girlfriend Fran will question his sanity.
Unable to put his vision aside, he talks Fran into checking out Gasson, which had been undergoing a major remodeling for over the past year. In order to get into the building, they would have to climb over the fence and break in. Fran finds this part of Jack to be a part of what draws her, she is not the believer or dreamer he is, but she is game to check out the old empty and out of bounds building.
Little does either of them know that they have set a chain of events in action that cannot be stopped. It will take them and seven of their closest friends to find the mystery surrounding Gasson, and the ghosts that seem to be ensconced. Looking for information, each of the friends herald information from their own studies. Is it possible that the ghosts have tracked the Templar knights and the Holy Grail to Boston College and this place in history? That seems to be the message, yet only Jack and Fran are at the center, when magic begins to evolve, they are both excited and yet dismayed.  Finding themselves in the middle of a centuries old mystery, fighting against evil ghosts, a bull and a dragon, their quest for the grail is solidified when they come upon an old map? Will they succeed in this strange quest and save the college? Can they and their friends survive against the odds and with the secret knowledge they now carry?
This is a true marriage of the two distinct worlds of Harry Potter and The Davinci code. Where the one is all about magic and the other is about the religious aspects and science, Maxfield has given us a mix that is thoroughly satisfying. The characters in the forms of seniors at the college are written with an eye to excellence in knowledge, and without their individual components there would be a difficulty in the belief of the facts as written. Each character carries a piece of the puzzle with Jack and Fran as the center piece. Throw in evil ghosts, modern day Templars, professors that may be just a bit untrustworthy, and mix that with the whimsy of a dragon and a giant bull, any you have the makings of a magical, mystical suspense that at times keeps you on the edge of your seat.
What I found missing in the Potter series and The Davinci Code, has been superseded and twisted into a triumph in Grail Mysterium. The characters are well written and you care about them. You worry when they are hurt and wonder what they are up to. There is something satisfying about this work, and I would love to see it made into a movie; there is a depth that is intriguing.
This would be an excellent book for your teenager or young teen, but it is also a wonderful read for anyone who enjoys the paranormal, a bit of romance and a great deal of adventure. The book is full of twists and turns, and I found myself reading a bit slower than usual, I did not want to miss something important.
Maxfield’s works seems to gain momentum with each work he churns out, this is a engrossing work and a must have for your library. A great read for most age groups, you will lose yourself in the pages.
Rating 5/5
This book was received free from the authors publicist. All opinions are my own based off my reading and understanding of the material.
Posted by Leslie at 6:27 PM