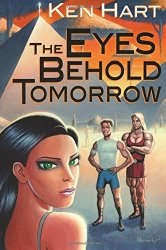 As a child and even on into adulthood we look at the night sky to marvel and wonder at the stars. Bright specks of brilliance, these pinpricks of light draw us, and yet is there even a chance of ever making it there.
In The Eyes Behold Tomorrow by Ken Hart, we are given a story that takes us into the heart of the great frontier known as space. There are many examples of imagination on the market and each strives to find its niche in the market of science fiction. Hart brings us a possibility where the earth can be of use to save another world from extinction. When called upon many of the locals are tested for the strength and fortitude needed to move forward and become part of the Feletian Queen’s army.
One of those selected is Edward Robert Teach. He is a throw back of the old world, and barbaric in nature with an opinion on everything which he is more than willing to share. Yet for some reason he is drawn to the Feletians, and they, especially their women are drawn to him. Can he find his place in this new political arena, and help to keep Galactic war from destroying such a peaceful planet. And can he tame the woman who has chosen him as her mate. The two become intertwined as the danger heats up, and Edward must rely in his instincts to save the day. Will it be enough to both save the galaxy as well as his new marriage to a unique and dangerous woman?
Hart has given us a fun and adventurous story that takes us into the stars and beyond. He introduces us to several new races with a unique flair. The characters of his work are just slightly of beat, and exceptionally honest, a sometimes rare quality. The strengths are offset by the flaws and at times the flaws are what save the day. With the pace you feel like you are traveling at light speed and involved within some of the decisions.
The interaction between the Feletian women and the earth men is another story, as the women of this planet are the dominant species, and each of them has their own agenda. Yet this too is a part of the excitement, as the heat of the sexual experiences and romance add another layer to the already dangerous reality the Edward finds himself in. The problems are age old and yet picked up and dusted off and served to us in a new mold of thought.
The sense of wonder comes through with charming intensity, and yet the grittiness also bears witness to the danger and intoxication of being on the brink of war.
If you enjoy science fiction, romance, adventure, sex and interpersonal connections you will find this a nice addition to your library. Hart is an author to watch. You will enjoy the interactions and bantering of personalities. Edward Teach seems very much like a comic book hero, with all the problems associated.
Rating 4/5
This book was received free from the author. All opinions are my own based off my reading and understanding of the material .
Posted by Leslie at 7:55 PM