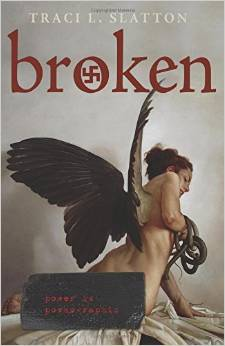 The years between 1939-1943 were a time of danger and intrigue in Paris. The German occupation created controls unused to in the city of love. While many Jews perished there were others, those who cared to try and protect them and their rights, who too disappeared never to be heard of again.
In Broken by Traci L. Slatton, we are given a view of the times through the eyes of a fallen angel.  Having lost her twin Ariel, Alia makes a choice to become human.  Not sure if her choice of times is intentional, she loses herself in lust and fornication. Parties and orgies are the means of her escape from her pain and loneliness. The danger of the times creates an added thrill, and yet she has inner anguish and questions that drag her down.  Even in her falling, she is watched over by Archangel Michael. He can see the true nature and is disturbed by the turn of events.
Yet he can only watch, aware just how vulnerable she had made herself. She toys with men and two of her favorite lovers are Pedro a bullfighter, and Josef a musician. She has become very close to her neighbor Suzanne, a young Jewish widow, and her daughter Cecile.  Alia soon realizes that she would do anything to ease their pain and fear.
Yet as her lovers both join the resistance and the Nazis come knocking on doors, Alia works hard to find a way to save Suzanne and her daughter. As she moves forward she too becomes a danger, both to them and to herself.  As her other friends flee Paris, she must stay and find a way to rescue them, but can she.  As torture and pain create those who would do anything to escape the treachery, will betrayal of those closest to her be the end.
While Arch Angel Michael warns her of her doom, she too has visions of how things will be as differing turns are taken. Can she make the right choices and save them all, or is it too late.
Slatton has created characters that seem to leap off the page, and the danger of the time is palpable. The cruelty displayed raises the hair on your neck, and creates a knot in the pit of your stomach.  In the beginning you don’t know if you will like Alia, and as the story progresses you begin rooting for her. While she continues her lifestyle, there is so much bravery and pain behind the façade.
The passion and egos of the Parisians depicted is both alarming and bold. Sex, alcohol and drugs are the rules of their group, and their friendships often borders on the absurd.
If you enjoy heat and passion with erotica and danger you will find this to your liking. It is riddled with bits of history and twisted into a paranormal tale, full of greed, romance and a beauty that shines through in the form of Cecile. Her character seems to break the pall that surrounds Alia and helps her move beyond the darkness of her soul.
There is a deadly menace as well, creeping forward and devouring all that is pure and innocent. Inexorably the Jews are hunted and their supporters as well. The times were horrible for so many, leaving broken homes and families in the wake of Germany’s fury.
Rating 4/5
This book was received free from the Author. All opinions are my own based off my reading and understanding of the material.
Posted by Leslie at 8:49 AM