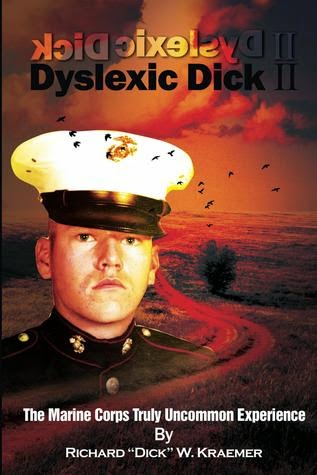 Many choose to serve their country through the different branches of the military. Each has its distinct heritage, and those who have served often hold their training and abilities learned for a lifetime. Yet not everyone has the same experience.
In Dyslexic Dick by Richard “Dick” W. Kraemer, we are given a view of entirely different circumstances and experiences. Often what we know about the different branches comes from who we know a family member or friend who may have served. Many are silent and hold their time and experience close, not sharing that interval of their life with anyone except with friends they may have made in their own branch. Others let fly everything that may have occurred, and with everything there is both good and bad.
Dick has given us a view of his own experiences. Having found a way to enlist in the Marine Corp he finds difficulty with many of the training exercises, often due to a genetic marker called Dyslexia. Often more of a hard ship in school, reading is made difficult, but there are other side effects as well which he brings to light as he moves through training.
Throughout the narrative, the author is very open about his anger, and his own activities, he is also unapologetic and very succinct in his view of his own experience.  He brings his own brand of humor as well as his diary like journaling and takes us on his passage as a young man through jaded eyes enlightening us to some of the pitfalls and decisions that occurred. He is open about his own activities, sometimes criminal in nature, as well as the drug culture of the time. He also discusses those in charge who may have crossed the line in punishment, often with their own hidden agendas.
His story deals with both his home life as well as his time abroad and discusses his romances and his heartaches. His accomplishments and his criminal activities are laid out in succession, and he is open and quite unapologetic about his past, as it is a part of who he is now.
Kraemer moves through the narrative relating his own experiences as he sees them, and recognizes both the good and the bad. Much of what is writing seems hard to understand, and yet human nature creates its own set of rules and each person carries the baggage of their past into their present, often creating who they become.
If you enjoy autobiographies and want to see a differing view of the military you may find this book to your liking. There is humor and yet there is pain and loss. There also seems to be a bit of overriding anger, suppressed but still showing through in places.
This would be a good book for a discussion group, I am sure it would create a great deal of controversy and conversation.

This book was received free from the author. All opinions are my own based off my reading and understanding of the material.