Blood Sky, Book 4 of The After Series by Traci L. Slatton

Posted first to Blog Critics as Book Review: 'Blood Sky, Book 2 of The After Series', A Dystopian Romance by Traci L. Slatton. 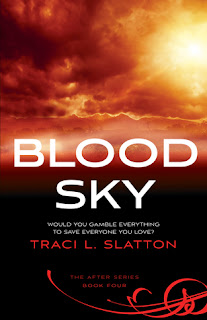 In Blood Sky, Book 4 of the After Series by Traci L. Slatton we are once again taken into the future world where danger reins. The once lovely planet has been destroyed by the very people trying to save it. Introducing the mists was meant to cleanse the land yet they quickly turned deadly to those it touched.

All over the world the danger continues and yet there are those whose lives have changed in differing ways based or the presence of the mist, gaining powers unimagined in the history of time. While Arthur continues to battle his own demons, Emma tries to move on without him. Having nearly lost him on several occasions she must now make a choice between her love and the lives depending on her.

Trying to get one of her young chargers to where the destruction all began, Emma knows she must stay out of reach of Arthur. While he has deep regrets for being a part of the team that brought the mists to the world he is still convinced that if corralled and controlled they will be the saving grace of the world that has now been beleaguered for so many years.

That makes him extremely dangerous, and Emma is convinced that madness is over taking him. She must harden her heart and stay ahead of him to rescue the world and eradicate the mists. She is determined to do what it takes, even destroy Arthur if necessary. Can she really take a part of her heart that has a life of its own, and move beyond for the betterment of mankind, or will Arthur convince her of his sincerity?

Slatton builds tension and romance in such a way that you are involved from the beginning. As you view the happenings from the eyes of her characters you are at once, appalled and even in love. Arthur is the epitome of that one who draws you in, with both the danger and the caring. She has done a great job or making the characters so real that you relate to them.

She draws you into a dystopian world of destruction and pain and yet portrays the beauty of what still stands. For among the destruction there are still the vistas to behold, the power of the sunsets and the icy bit and tingle of the frost in the air that glitters upon the damage. You often feel you are there, struggling with her group of survivors.

If you enjoy futuristic worlds, heroes, danger and tense passionate romance you will find Slatton’s newest release, Blood Sky, a great addition to your library. If you enjoy this work you will want to find the rest of the After Series to catch up on all the events.